The anticipated comeback of former multi division champion Oscar “Golden Boy” De La Hoya, a winner of eleven world titles in six weight classes, has been put on hold after De La Hoya was hospitalized with COVID-19 Novel Coronavirus. De La Hoya, 39-6 with 30 knockouts, Los Angeles, California, had been scheduled to fight 1-0 Vitor Belfort in an eight rounder at staples Center in Los Angeles on September 11, 2021. The proposed bout appears on BoxRec as a legitimate eight round cruiserweight bout. De La Hoya claimed it was only an exhibition of two minute rounds. De La Hoya’s intention, to fight at cruiserweight like Julio Cesar Chavez Jr. did three months ago, was still in the wrong weight class, and indicative of the dangers of returning overweight and out of condition.

Replacing De La Hoya will be former undisputed world cruiserweight and heavyweight champion Evander “The Real Deal” Holyfield, age 57, 44-10-2 with 29 knockouts, Atlanta, Georgia. Holyfield was scheduled to fight another Mike Tyson conqueror, Kevin McBride, in an undercard bout, exhibition or not, sometime this fall. Holyfield’s last official ring appearance was ten years ago, a tenth round stoppage of former International Boxing Organization World Heavyweight champion Brian Nielsen in Copenhagen, Denmark, in May 2011. It remains to be seen what Holyfield has left in the tank at advanced age.

The California Athletic Commission would still have to approve the proposed opponent switch, be in a real bout or exhibition. If not, the Holyfield versus Belfort bout and the show proposed for next Saturday to be televised on USA Fite will be moved to Florida. Also scheduled on the Staples Center card are: 2-1 MMA veteran Anderson Silva, who beat Julio Cesar Chavez Jr. in an eight rounder in June 2021, versus debuting Tito Ortiz; and 23-2-1 Andy Vences of San Jose, California, in a ten rounder against 19-2-1 southpaw Jona Carroll, Dublin, Ireland, in the main event. Possibly other bouts cold be added to the show.

Holyfield was in training for McBride. He should pass a prefight physical. Brazilian MMA fighter Belfort, age 44, MMA record 41-14 with 18 knockouts, Boca Raton, Florida, is a former UFC Light Heavyweight and UFC 12 Heavyweight champion who competes in the MMA Middleweight through Heavyweight divisions. Since De La Hoya versus Belfort was scheduled for cruiserweight, and Holyfield’s last known fighting weight was 225 pounds for Nielsen, the status of Holyfield versus Belfort is unknown. If Holyfield is at heavyweight, Belfort would have to go up in weight for a bout or exhibition. If Belfort is at cruiserweight, and Holyfield cannot come down in weight, the status would have to be an exhibition. It all depends how the CSAS views it if Holyfield versus Belfort clears the commission next week. 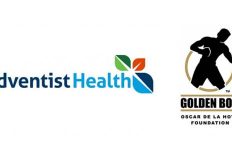