In the first two rounds southpaw Dawson used lead lefts to the body of the taller Pandzic. In the third and fourth rounds Pandzic used an effective jab in taking both close rounds.

In the second round Smith boxed well but got hit with a right on the chin in the final fifteen seconds and got dropped for an 8-count from referee Shawn Clark just prior to the bell. In the third round Jones came out firing punches having Smith against the ropes with no return covering up when referee Clark waved it off to the complaint of Smith.

In the spirited first round Cortes rocked Pucheta several times. In the second and third rounds Pucheta made it close being the aggressor with plenty of action though Cortes pulled them out countering well. In the fifth round both fighters had their moments with Cortes countering the ever coming forward Pucheta. In the sixth and final round at the halfway point Cortes had Pucheta in trouble with a flurry of punches. Pucheta came back well getting the better of it in the final thirty seconds.

Scores were 58-56 with this writer having it the same. Referee was Eric Dali.

In the first round it was all Brown with faster hands and foot speed. In the final seconds Brown dropped Marquez with a body shot for an 8-count from referee Clark just prior to the bell. In the second through the fourth a game Marquez kept coming forward as the slick southpaw Brown did well to outwork him.

In the final minute of the fifth round a lead left from Brown on the chin and down went Marquez for an 8-count from referee Clark. Marquez to his credit got up fighting right up to the bell. In the sixth and final round Marquez had Brown fighting off the ropes for the most part.

In the second round Stevens had James in trouble starting with a combination halfway through the round with solid uppercuts knocking the head of James back. In the fourth and final round both fighters mixed it up well with James getting the edge.

Scores were 40-36 with this writer having it the same. Referee was Shawn Clark.

In the first round with hands to his side Noble chased Revello down hurting him on several occasions. In the second round a flurry of punches from Noble had Revello down in the opening minute for an 8-count from referee Dali. Upon rising Revello was met with a flurry of punches from Noble getting dropped for a second time forcing referee Dali to wave it off.  Nobel’s is trained by Greg Hackett.

In the first four rounds Hemphill boxed well winning all rounds as a game Burwell made it interesting in the fourth round. In the seventh round the corner of Burwell called a halt.

Unbeaten heavyweight Paul Koon, 4-0, had his bout fall out with a no show from his opponent. 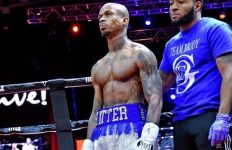