In the first round both fighters opened up in an exciting beginning. In the next two rounds it was Ortiz with Hooker taking the fourth with his jab and matching right’s. In the fifth round Ortiz came back with his firepower in taking the round with a left hook to the body hurting Hooker. In the sixth round a flurry of punches starting with a left uppercut from Ortiz dropped Hooker for an 8 count from referee Laurence Cole. In the seventh round a left hook to the body from Ortiz hurt Hooker then a right on the chin dropped him for the count.

“I wanted to fight him at 140. He didn’t have to take the fight at 147. I felt really good but could have done better. He was smart and trying to get around my guard. I didn’t think it was going to go the distance. The head shots were not hurting him so I went to the body. I believe in myself and am ready for a title shot for anyone who is willing to give it to me. (In his answer to champions Crawford and Spence in the audience) I do all my talking in the ring. I want that fight (pointing to Spence),” said Ortiz.

In the second round Estrada rocked Ortiz twice with left hooks to the chin. An overhand right from Estrada on the chin of Ortiz and down she went with 30 seconds left in the round. In the fourth round Under Ortiz’s left eye was much swelling.

In the sixth round Ortiz finally seemed to win her first round and possibly the seventh though she had a lump on her forehead. In the eighth through the tenth it was all Estrada with her punching power more than Ortiz can combat. The referee was Mark Nelson.

“She was the reigning champion for 7 years with 12 title defenses. I knew she was durable and hadn’t been stopped for a long time (almost 10 years for the only time). I want to unify the titles,” said Estrada.

In the first round Nino Lopez jab dominated snapping the head of Jairo Lopez back. In the second round at the halfway point a right from Nino on the head of Jairo and down he went for an 8 count. Upon rising Jairo fought back well. In the third round a lead overhand right from Nino on the chin of Jairo and down he went halfway through the round for an 8 count. Upon rising Jairo got hit behind the head and got a chance to rest. A minute later it was Jairo rocking Nino with a left hook on the chin. It was all action until the bell.

In the fourth round Nino was cut on left eyebrow due to accidental clash of heads in a war. In the fifth round a left hook on the chin from Nino had Jairo down for a fourth time. Jairo kept shaking his head “no” forcing the referee Mark Calo to call a halt.

In the first round Kalkrueth landed over a dozen unanswered punches before knocking out Long. Referee Ellis Johnson still counted to 10. Long left the ring on a stretcher.

“He’s a star in the making. He’s a good kid. With his amateur background we need to step up his competition,” said promoter Oscar de La Hoya. 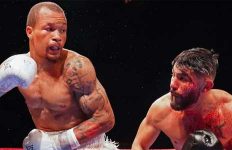 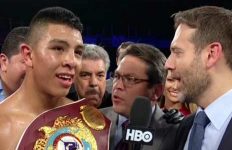 Canelo vs. GGG 2 Undercard to be Stacked with World Champions and Returning Contenders→