At the Khodynka Ice Palace, Moscow, Russia, Saturday, over ESPN, Patriot Promotions Company – Alexey Avsetsin in association with Top Rank in the Main Event presented WBC and IBF World Light Heavyweight champion Artur Beterbiev defended his titles with a tenth round stoppage of a game IBF No. 5 ranked Adam Deines.

In the first round it was competitive until the final seconds when Beterbiev countered a left with a glancing right on the head dropping Deines for an 8 count. In the second and third rounds Deines came back shaking off the knockdown in both close rounds. In the fourth round a left uppercut from Beterbiev on the chin of Deines knocked his head back a minute into the round. In the fifth round Deines butted Beterbiev who countered with a right on the chin. There was without a warning from referee on butt. In the sixth round Beterbiev drove Deines into the corner throughout the round. With a minute left in the round a left hook from Beterbiev on the chin rocked Deines. In the final seconds Beterbiev landed three unanswered punches on the chin of Deines.

In the eighth round of a close round Deines was busier with a half minute left in the round when Beterbiev rocked him with a left hook to the chin. In the ninth round Beterbiev chased Deines around the ring having a big offensive round. In the tenth round a pair of short left hands on the chin of Deines scored a knockdown. Upon rising the corner of Deines threw in the towel.

In the first round it was Silyagin being busier and got Abdugofurov’s attention with a right to the chin near end of round. In the second and fourth rounds Silyagin used an effective countering jab switching to southpaw. In the sixth round a right from Silyagin drew blood from the nose of Abdugofurov.

In the seventh and eighth Abdugofurov started with more offense mixing it well with Silyagin taking both rounds. In the ninth through the twelfth it was all Silyagin having Abdugofurov in trouble in the final round.

In the first two rounds it was all Besputin. Piotnikov didn’t come out for round 3.

In the first round it was all Agrba having Rojas in trouble a minute into the round with a flurry of punches. In the second round Agrba had Rojas pinned in corner rocked with a flurry when referee waved it off.

In the first round a left hook by the much heavier Mironchikov to the ribs dropped Akhundzada for an 8 count. He got through the round but didn’t come out for second round.

In the first round it was all Ivanov. In a corner Stepanov took a right uppercut to ribs from Ivanov causing the referee to wave it off as Stepanov doubled over.

In first round it was all Akhmetkhanov much busier. In the second round Akhmetkhamov landed a lead left to the ribs dropping Karpets to his knees for the count. 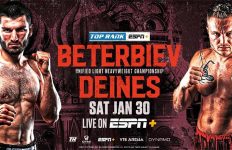 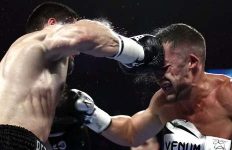 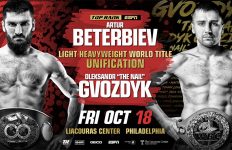 Gvozdyk vs. Beterbiev: A Russia-Ukraine Story 10 Years in the Making→