In the first round early Machado landed a right to the chin stopping Fierro in his tracks. A right hook from Machado on the chin and down went Fierro for an 8-count with a minute left in the round. In the final seconds of the second round a right hook from Machado to the chin dropped Fierro for an 8-count. In the fourth round Fierro backed up Machado the entire round having him hurt at the bell with an overhand right to the chin. In the fifth round Fierro continued coming forward landing a left to the chin knocking out Machado who took the entire count by Jose Hiram Rivera.

“I was knocked down twice and kept telling my trainer to remind me of my daughter who I wanted this win for,” said Fierro.

In the sixth round a left to the chin from Fierro and down went Machado for the full count. All 3 judges had it 48-45 Machado after 5 rounds.

In the first round Gonzalez off to a good start outworking Martinez. In the second round Martinez went to the body taking a close round. In the third round Gonzalez continued to make Martinez miss quite a bit, countering him. In the fourth and fifth rounds Martinez started showing his power.

In the sixth round and seventh rounds Gonzalez continued grabbing Martinez after each exchange, feeling the power of Martinez. In the eighth round Gonzalez became the aggressor taking the next two rounds. In the tenth and final round with the bout on the line Gonzalez just didn’t seem to do enough until the final seconds. Even the referee Melva Santos looked tired barely separating the fighters in clinches.

In the seventh round Mendoz hit the canvas. All scores 79-72.

In the first round three rounds the taller southpaw Ward took the first and third and fourth rounds with Delgado being warned for dirty tactics. In the fifth and sixth rounds it was sloppy with Ward countering the oncoming Delgado. 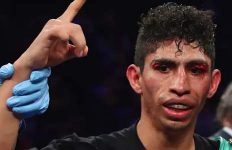 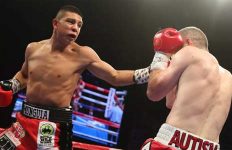