In the first round there were a total of 4 punches landed, a left to the body and right to the head by Dirrell putting Davis on the run. In the third and fourth rounds Davis picked up the action outworking Dirrell.  In the sixth round Davis rocked Dirrell with a right on the chin in another close round.

In the eighth round Dirrell rocked Davis with a left to the chin. In the eleventh round Davis landed a combination to the body and head of Dirrell. In the twelfth and final round it was another close round Davis pulling it out with the decision up in the air at the end. Referee was Ray Corona.

In the second round Ramos landed a right to the chin and down went Bojorquez for an 8 count. Ramos went right after him having him cut on the left eye brow landing punch after punch causing referee Thomas Taylor to call a halt.

In the fourth round Valenzuela scored 3 knockdowns ending the fight.

In the first round Mielnicki controlled with his jab pressing forward. In the second round Mielnicki rolled under a jab and landed a right to the chin and down went Lopez for an 8 count from referee Gerald White. In the

Abram was down in second and Alejandro down in the fifth. 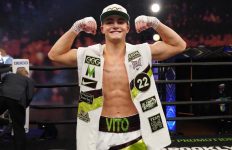 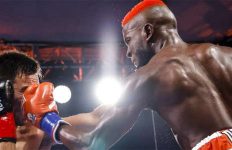