We were all enthralled by his brashness, celebratory backflips and post-fight home run swings, and the boxing world knew Teofimo Lopez Jr. could fight a little, too.

In 2020, Lopez proved he could beat the best, with his electrifying October victory over Vasiliy Lomachenko, making him the undisputed lightweight world champion.

The emphatic win left no doubts.

Fight fans around the world noticed. So, too, did the boxing media.

It’s why the Boxing Writers Association of America have selected Lopez as the 2020 Sugar Ray Robinson Award winner for Fighter of the Year.

Lopez beat out a stellar class that included the BWAA’s No. 1 pound-for-pound fighter, Canelo Alvarez, and Gervonta Davis, Tyson Fury, Errol Spence Jr. and Joe Smith Jr. Lopez also became the first American to win the BWAA Fighter of the Year award since Floyd Mayweather in 2015.

“I’m very appreciative of this,” Lopez said. “It’s been a long journey and this is just the beginning. What I can say is this is a true big win for us. It’s surreal. Sometimes I still think this is a dream for us, but we turned that dream into reality.

“Every fighter that I look down on the list of past BWAA Fighter of the Year award winners are in the Hall of Fame, or going into the Hall of Fame. Now I’m a part of that group and that history. It’s something no one can take away from me. There is so much more that we can do.”

Lopez’s selection is the crowning moment for Team Lopez, which won the BWAA’s coveted triple crown by winning the BWAA’s fighter, trainer and manager of the year awards for 2020.

It was once a rare occurrence, though with Lopez chosen as Fighter of the Year, Teofimo Lopez Sr. chosen as Trainer of the Year and David McWater of Split-T Management selected as Manager of the Year, the BWAA triple crown has been achieved for the third time in the last four years.

“I never expected this,” Lopez Sr. said. “This is a tribute to all of the hard work that we put in. I was thinking about my son. I wasn’t thinking about any awards, so to get this from the BWAA makes me a part of history and I’ll be in the boxing books forever. It’s a great honor and I don’t plan on letting anyone down.”

Lopez Sr. was selected over a distinguished list that included Robert Garcia, Sugar Hill, Derrick James and the BWAA 2019 Trainer of the Year Eddy Reynoso.

“Getting this award is pretty exciting and very vindicating,” McWater said. “It involved a lot of hard work, and it’s especially sweet because I felt last year Keith Connolly (the 2019 BWAA Manager of the Year) deserved it so much, which I felt gave the award more credibility than in the past.

“It’s a tribute to our whole company at Split-T. Everyone at Split-T has so much to be grateful about for Teofimo and his father. Their awards couldn’t be more deserving.”

McWater won out over a distinguished class that included Connolly, Peter Kahn, Rick Mirigian and Reynoso.

The Jose Zepeda-Ivan Baranchyk junior welterweight fight was a landslide winner as the BWAA Fight of the Year. The October classic featured eight combined knockdowns. Zepeda was knocked down twice in the first, once in the second and once in the fifth. Baranchyk was down once in rounds two, three, four and five.

“This is very exciting, because I know now that this will be part of boxing history,” Zepeda said. “I’m glad that I was able to be in a fight like that, and I’m happy for me and Ivan, because both of us gave up everything in there.

“It’s why we’re part of boxing, because we gave it our all. It’s double the pleasure, because it’s Fight of the Year, and I won. I think a lot of good things can happen for me this year, because of that fight. I know fans want to see that fight again. I think our second fight could be even better than our first fight.”

Anyone who saw it won’t forget it, and anyone who didn’t see it made sure that they did.

“This is great,” Baranchyk said. “I saw the fight one time with my trainer, that was it. I went back over the fight to fix my mistakes to be ready for the rematch. I would like to fight Jose again.”

Finally, the 2020 John McCain-Bill Crawford Courage Award goes to the Magomed Abdusalamov family, who have been taking care of the Russian heavyweight after he suffered severe brain injuries during his fight with Mike Perez on November 2, 2013, at Madison Square Garden.

Mark Breland, Prichard Colon, Derrick James and Jose Santa Cruz were the other considerations in that category.

Cus D’Amato Award Manager of the Year 2020 winner: David McWater 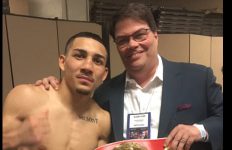 David McWater Is One of Boxing’s Top Managers & Talks to Brick City!→