We say goodbye. From January to December 2020, a dramatic time period for both professional sports and the world, the COVID-19 Novel Coronavirus impacted everyone. As infections rose and casualties mounted, professional sports lost many famous names. Professional boxing lost a number of noteworthy names influential to the sport, some to Coronavirus, others due to other health reasons. Some names worth remembering:

Eddie Cotton (the referee and judge), 72, the former director of International Boxing Federation, died of COVID-19 Novel Coronavirus in Paterson, New Jersey. Cotton is not to be confused with Eddie the boxer, who held the Michigan version of the World Ligt Heavyweight championship, who was later a member of the Washington Boxing Commission and a restauranteur, who died in Seattle, Washington, in 1990 following a second liver transplant., The two Eddie Cottons are not related.

1956 Olympic heavyweight gold medalist turned businessman Pete Rademacher, who fought Floyd Patterson for the World Heavyweight championship in his first pro bout in August of 1957, had Patterson down in the second round, but lost, died at 91 at the Ohio Veteran’s Home in Sandusky, Ohio, where he suffered from Dementia Pugilistica for a number of years.

Angelo Rottoli, 61, former European Cruiserweight champion and WBC world title challenger, died of COVID-19 Novel Coronavirus along with his mother and brother, in Bergamo, Lombardia, Italy. Rottoli was considered a small heavyweight in the 1980s, fighting mostly in the 193 to 198 pounds vicinity, which is currently categorized by the newly created Worfld Boxing Council Bridgerweight boxing weight class today.

Other Causes or Cause of Death Undisclosed Boxing Passages

Mahmoud Fadel, 58, heavyweight who was one of Muhammad Ali ‘s sparring partner in the 1970’s, died of Lewi Body Dementia. Fadel was being treated for Alzheimer’s Disease and Lewi Body Dementia at a Michigan care facility.

Brother Naazim Richardson, 54, boxing trainer at Shuler Gym, of Bernard Hopkins, Steve Cunningham, Shane Mosley and many others, after a long illness of several years, in Philadelphia, Pennsylvania. 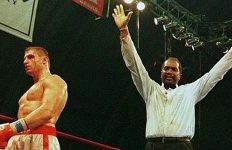