Charismatic Las Vegas heavyweight boxer and promoter Ronald Johnson returns to the ring on December 12th in either Las Vegas or Miami. Ronald “The American Dream” Johnson, 17-1, 4 KO’s, is a cagey boxing technician that used his guile to unexpectedly sign megastar Logan Paul to a contract. The tireless working entrepreneur is in pole position to become one of the most powerful men in boxing with Paul expected to face Floyd Mayweather. Most fight media experts are giving the YouTube sensation Paul little chance of winning but Johnson feels that his man has a good chance with top-flight trainer Milton LaCroix in his corner. Logan Paul vs Floyd Mayweather Boxing Odds have Mayweather as a massive 35 to 1 betting favorite but it should be noted that Floyd is 5’8″ 150 Lbs. and Paul is 6’2″ 200 Lbs. so, physics may play a bigger factor than meets the eye.

Johnson’s passion for fighting is the reason why he is willing to engage in the manly art of self-defense even with the Paul vs. Mayweather bout on deck. The once-beaten Johnson’s only blemish is a highway robbery 6-round decision while coming up the ranks against dangerous puncher Darnell Boone. The slickster promises that his heavyweight headliner on December 12th will provide plenty of excitement in a top-notch card.

The action-packed card will feature the return of assassinating puncher “Awesome” Aaron Williams 21-3-1, 14 KO’s, who is regarded as one of the best cruiserweights of his generation. Williams, 34, is making his return to the ring after a 9 1/2-year hiatus but don’t be surprised if he disturbs the peace in his recent comeback. The Cleveland, Ohio bomber Williams (70% of wins via KO) has been featured on ESPN’s SportsCenter several times for his exorcist like knockouts and is worth the price of admission.

Also, on the card is 6’7″ U.K. heavyweight prospect Jack Storey, 1-0, 0. The 24-year old Santa Monica, California based Storey, 24, was dominant in his debut against 8-fight veteran Omar Acosta with a wide decision win and is one to watch. Stay tuned as I follow Ronald Johnson’s journey as boxing’s latest renaissance man, with an exclusive interview later in the week.

Fights out of: Las Vegas, Nevada 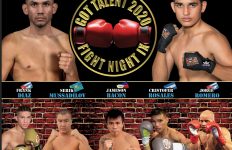