In the first round Horn grabbed Tszyu within seconds setting the stage for his holding and hitting behind the head. Referee Phil Austin continued to warn him. It was like the bull against the matador. In the second round with a minute to go Tszuy landed a right cross on the chin of Horn, the best punch up to that point. In the third round a right on the chin from Tszyu hurt Horn. A left hook from Tszyu on the chin of Horn knocked him down with seconds to go in the round. With Horn you need “two” referee’s, each to grab an arm to prevent him from holding.

In the sixth round Tszyu started landing the right uppercuts to the chin of Horn when he rushed in with his head. In the final minute a left hook to the body from Tszyu hurt Horn backing him into a corner. Tszyu followed him and landed a right on the chin and down went Horn for a second time in the fight. In the seventh round a right from Tszyu hurt Horn on the chin. He followed with a right uppercut to the chin rocking Horn.

In the eighth round Tszyu went to the body with left hooks to the ribs and rights to the head of Horn. In the corner Horn’s people wanted to stop it and convinced him not to come out for the ninth round to receive more punishment.

“My name is Tim, not the son. He was tough. I want to represent the fans of Australia, Russia and around the world. I want to thank the sponsors and my team. I will be back in the gym Monday. Jeff has raised the flag for Australia. It was an honor to share the ring with you Jeff. Remember everybody the name is Tim Tszyu,” said Tszyu.

“He was much younger and said he was the best before this but is now. Tim has the hunger about him. I could feel it through the night. I’m so glad I wasn’t cut tonight. Tim gave me some body shots and head shots tonight. I want to thank my corner and sponsors,” said Horn.

This writer had it 80-70 with Tszyu winning every round. The future is bright for Tim Tszyu coming out of the father’s shadow a little bit more tonight! 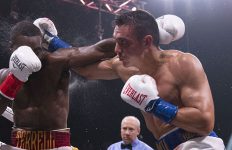 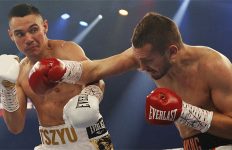