In the first round Madrimov switched from southpaw to orthodox and landed a grazing right on the chin of Walker but lost his balance. In the second round Walker landed a solid right rocking Madrimov. Madrimov had good four rounds before Walker finally took the fifth. In the eighth Walker had his best round up to that point. In the ninth round Madrimov landed a wild left to the chin knocking Walker backwards toward the corner and bullying him to the canvas. Walker was given a 5 minute rest by the referee Gary Ritter who took away a point from Madrimov.

In the twelfth and final round Madrimov had Walker down but was taken away a point for low blows. Madrimov had red marks outside of both eyes at the end.

“The fight was tougher than I expected. I thought the fight should have been stopped in the eighth round. I was trying for the stoppage early and should have boxed more,” said Madrimov.

In the first round Braekhus out landed a game McCaskill who came back well in the second round. In the fifth round McCaskill landed an overhand right to the head of Braekhus, her best punch so far in the fight. In the sixth round McCaskill caught Braekhus pulling back landing a right on the chin of Braekhus.

The fight was close to the end with McCaskill throwing more punches if not landing more.

Scores were Karen Holderfield 95-95, Gerald Ritter 97-94 and David Sutherland 97-93 with this writer having it 96-94 for Braekhus. Referee was Lawrence Cole.

“This was for the fourth grade homeless girl who won this fight tonight. I can’t wait to get back to Chicago and celebrate. I didn’t stop tonight but she was rough in there. I look forward for a rematch. I was waiting for them to call my name and say the new,” said McCaskill.

“I just want to congratulate Jessica at this time. If this is my last fight I want to say I am glad to take women’s boxing to this level. Jessica threw more punches than me tonight and don’t want to say anything else. I’ve done so much but miss my friends and want to thank all in boxing,’ said Braekhus. She was so humble in her response.

Lucia “The Dutch Destroyer” Rijker, 17-0 (14), IBHOF inductee in this writer’s opinion is by far the greatest female boxer of all time.

In the third round a left to the liver from Giyasov and down sent Campos for the count by referee Gerald Ritter.

In the third round a right hook from southpaw Ford on the chin of Manriquez dropped him for an 8-count by referee Gerald Ritter. He managed to get through the round. In the fourth round Manriquez landed his best punch of the bout switching to southpaw inside landed an overhand left to the chin of Ford.

In the sixth and final round seemed to be looking for the knockout that failed to come while pitching a shutout.

“I hadn’t fought in over 6 months and it wasn’t my best performance. I live and I learn. I felt in the sixth round I was feeling good but I didn’t want to take a chance for a knockout and get caught with something,” said Ford.

“He was a tough opponent tonight. I hadn’t fought in 8 months and was about 20 lbs over several weeks ago. I had some personal problems and hope to get down to 154 in the future,” said Ababiy.

In the first round Williams came out fast taking it to Ababiy. From the second time on Ababiy held an edge though Williams was always in the fight. 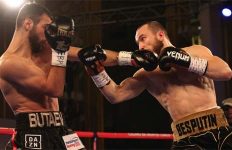