In the first four rounds Cash controlled. In the fifth Cash lost a point for another low bow. Then an overhand right from Cash on top of head down went Welborn. In the final minute another right on the chin from Cash and down went the shorter Welborn forcing the referee Michael Alexander to wisely wave it off.

“It took me three rounds to find my range. I knew I was hurting him with body shots. I will fight anyone in the country,” said Cash.

“He’s a good fighter and my corner said I was behind when I caught him with a good shot (first knockdown),” said Barrett.

In the seventh round Conway had Mansouri out on his feet in the last thirty seconds. In the eighth and ninth Conway tried for stoppage but couldn’t make it happen. Referee Steve Gray allowed Mansouri to land rabbit punches the entire fight without warning.

In the third round Docherty dropped Fox with a right hook on the chin. Docherty suffered a cut on his left eyebrow. At the end of the sixth Docherty landed four lefts to the chin of Fox. In the seventh round three lefts from Docherty on the chin dropped Fox. Upon rising Docherty jumped on Fox landing punches in bunches before the referee Howard Foster wisely called a halt. Fox had a bloody nose.

“He’s a lot stronger and better than I thought,” said Docherty.

In the first round the shorter Courtenay landed a big right but got countered with a left hook on the chin from Ball and went down for an 8-count. By the end of the fourth Courtenay was in control. Ball came back well including winning the last round. Ball had a lump outside her left eye at the end.

“I’m sorry to be so emotional. She hits hard, I’m glad to get the win,” said Ball. 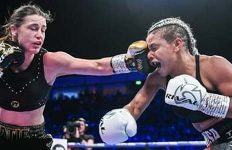