In the first round the shorter Spelman outworked Arthur for half a round. Arthur then used his reach controlling with his jab with an occasional right uppercut to the chin. In the second round Arthur gave Spelman a boxing lesson controlling with the jab. Spelman had swelling under his right eye.

In the third round Arthur even off the ropes landed a variety of punches to the head of Spelman who bled from the nose halfway thru. It was all Arthur. In the fourth round Spelman kept Arthur on the ropes thru the first two minutes. In the final minute Arthur off the ropes landed a variety of uppercuts to the body and chin. In the sixth round Arthur started showboating with hands to his side moving around the ring landing punch after punch.

In the seventh round Spelman kept an attack keeping Arthur on the ropes with little returned punches. In the eighth and ninth rounds Arthur went on the attack mostly off the ropes landing uppercuts to the body and head of Spelman. In the tenth and eleventh rounds Spelman kept up the pressure but walked into too many of Arthur’s punches and his face showed it. In the twelfth and final round if gut’s alone counted Spelman would be a winner. Unfortunately for him Arthur completely dominated the round and majority of the fight with a complete offensive arsenal. Built like former world champion Bob Foster Arthur had too much arsenal for the gutsy Spelman in an entertaining 12 rounds.

In the third round both fighters mixed it well after a slow start. In the seventh round in the final minute Agyarko landed a right to the chin followed by a left hook to the ribs dropping Smith for an 8-count. He managed to get thru the round. In the eighth round a right to the ribs from Agyarko dropped Smith for an 8–count, for a second time he got thru the round. This was a very good bout up until the seventh.

In the first round the shorter Ball had Campbell against the ropes for the most part with a two fisted attack primarily to the head of Camp who may have blocked half of them. In the second round Ball continued throwing punches in bunches. Campbell when off the ropes used some good body work on Ball. With a little over a minute left Campbell suffered a cut on the right eyebrow. In the third round it was Ball bleeding from the nose. In an active round on both parts Ball still landed more though Campbell had his best offense. In the fourth thru the sixth Ball kept pushing Campbell to the ropes with an assault of punches. Campbell would do well in the middle of the ring with mostly head shots. In the seventh round Ball drove Campbell into the ropes with a flurry of punches that only the ropes held Campbell up receiving an 8-count from referee Mark Lyson. He managed to get thru the round. In the eighth and final round it was all Ball battering Campbell all over the ring and his marked up face showed it. Ball couldn’t put Campbell away but won every round. 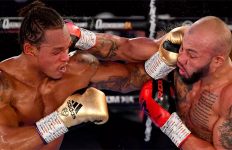 Lyndon “King” Arthur Wins SD over Anthony “The Beast from the East” Yarde!→