In looking over the strange 13 bout career of WBO Heavyweight champion Michael Bentt one has to wonder. His amateur record was listed at 148-8 having won four New York Golden Gloves titles.

In 1988 at the Olympic trials he lost to “Merciless” Ray Mercer who would also become the WBO champion in 1991 after winning the Olympic Gold Medal.

Bentt turned pro under Manny Steward’s Kronk banner. In his first fight he gets stopped by southpaw Jerry Jones, 5-1, who had stopped a pair of unbeaten boxers, 2-0 and 7-0 in his two previous fights. Bentt couldn’t come out for the second round in his Atlantic City debut in February of 1989. Jones would end up his career at 9-11 also losing to Mercer.

Bentt returns to New York from Detroit and has his second bout in December of 1990 in the country he was born, the UK. He was a sparring partner for UK’s Gary Mason who was in the main event. He fights 3-21 James Holley and starts a ten fight winning streak against opposition with a combined record of 60-101-12. This was over a 2 1/2 period of time. The tenth fight was his first 10 rounder defeating 14-10-1 Mark Willis.

WBO Champion Tommy “The Duke” Morrison was looking for a tune-up fight prior to meeting Lennox Lewis. Somehow Bentt gets a title fight with Morrison in October of 1993 at the Civic Center in Tulsa, OK. Bentt scored three knockdowns to win the title in 93 seconds.

Bentt makes his first defense against Nigerian Herbie Hyde, 25-0, in London in March of 1994. Was this a “tune-up” for a bout with WBC champion Lewis? Lewis had stopped Mason who was 35-0 at the time and who Bentt was a one-time sparring partner.

Rumors were Bentt suffered a concussion in sparring prior to the Hide fight and shouldn’t have taken the fight but his management had different plans. Thirty seconds into the Hide fight Bentt was hurt. He came back to take the second round but in the third round Bentt got dropped but managed to get through the round. He may have won the next three rounds but was following Hide around the ring for the most part when out of frustration it looked like he bit Hide on the left shoulder in the seventh round while in a clinch.

Hide knocks Bentt down in the seventh with about twenty seconds to go in the round. Bentt tried beating the count but didn’t quite make it at 2:50 of the round. He ends up in a London hospital with possible brain damage and never fights again.

At 11-2 Bentt’s boxing career was over! He would go onto Hollywood of all places and play Sonny Liston in the movie “Ali!” This writer really isn’t interested in what happened outside of boxing but had to wonder how in the world did Bennt ever get the chance for a title and lose it that fast and never fight again? That was one of the strangest careers of a boxing heavyweight champion! 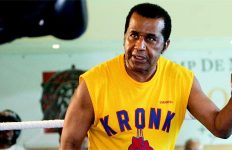 How I Remember Manny Steward!→