In the third round Greer came out boxing well up until the end of the first minute when Plania landed a solid left hook to the chin. Greer was able to move and land the jab the rest of the way against Plania. In the fourth round Greer was moving and boxing well until a lead left hook from Plania landed on the chin. Greer continued to box well the rest of the way.

In the fifth round Plania was warned by referee Weeks about a glancing low blow. Greer seemed to stay a step ahead of the harder hitting Plania. In the sixth round with his hands mostly to his side Plania kept stalking Greer who used his jab well. In the final ten seconds Plania landed a left hook to the chin of Greer dropping him for the 8-count of referee Weeks.

In the seventh round Greer picked up the pace after being dropped twice in the fight. Plania seemed to be loading up looking to land a big punch. In the eighth round both boxers went to the body in the middle of the ring. Greer was outworking Plania with good body work. The final ten seconds both landed flurry of punches until the bell.

In the ninth round Greer continued being the aggressor, with Plania holding through the first half of the round. Plania showed fatigue backing up as Greer was putting on the pressure. In the tenth and final round Greer came out firing punches. Plania was only landing punches out of desperation as Greer was outlanding him. At the bell Plania fell to the canvas with hands up in the air in a premature celebration.

In the third round both fighters started mixing in up well. DeMarco kept the fight in the middle of the ring while not allowing Santillan to back him up. The final ten seconds were furious with both boxers unloading on one another. Good round for DeMarco. In the fourth round Santillan landed a 3-punch combination at the halfway mark of the round to the body and head of DeMarco who came right back with a right hook to the chin.

In the fifth round DeMarco became the aggressor. DeMarco is landing a good right hook to the body and head. Santillan seemed to forget his jab. DeMarco backed Santillan to the ropes with a lead left on the chin. Good round for DeMarco. In the sixth round the action heated up with both boxers using uppercuts to the body and head. Halfway through the round DeMarco hurt Santillan with a pair of left uppercuts on the chin. Santillan had some blood coming from his nose after that exchange.

In the seventh round Santillan got back into the fight backing DeMarco to the ropes. DeMarco fought his way off the ropes with a good body attack. DeMarco finished the last half of the round strong landing double right hooks to the body of Santillan. In the eighth round DeMarco backed against the ropes and countered Santillan with combinations moving him to the middle of the ring. In the final ten seconds DeMarco landed three right hooks to the body of Santillan.

In the ninth round DeMarco continued outworking Santillan throughout the round. He used his experience well. In the tenth and final round Santillan flurried with half a dozen punches to the head of DeMarco. Knowing he may need a knockout he is going all out but DeMarco matches him punch for punch. DeMarco had a good second half of the round pulling out what looked like the win. Only thing is in Las Vegas you never know. Tony Weeks was the referee.

Scores were Steve Weisfeld and Dave Moretti 96-94 with Tim Cheatham 95-95. This writer had it 97-93 DeMarco. The ESPN commentators also felt DeMarco deserved the win. DeMarco had a shocked look after hearing the decision.

In the first round both fighters mixed it well from the start. Krael boxing and Mominov slugging to the end of the round. In the second round a solid right from Mominov to the chin rocked Krael. Krael boxed well the rest of the round holding off Mominov for the most part until the final minute when Mominov rocked Krael with a 3-punch combination to the body and head.

In the fourth round Krael was throwing punches well but didn’t have the power of Mominov. Krael had his best round of the fight up to that point. In the fifth round Mominov landed well to the body. Midway Krael turned southpaw and was landing well until driven into the ropes by Mominov. In the final thirty seconds it was Krael driving Mominov into the ropes with a flurry of punches.

In the sixth and final round Mominov suffered a cut outside of his left eyebrow a minute into the round. Mominov was penalized a point for hitting behind the back of the head by referee Hoyle.

Scores were Cheeks 57-56 Ocasio and Weisfeld 58-55. This writer had it 57-56. Mominov was from the same city as GGG Golovkin and had the same amateur trainer.

In the first round Sekhniashvili pressed the fight the entire round being the heavier hitter keeping Jones on the defense. In the second round referee Robert Hoyle warned Sekhniashvili about using his forearm to the chin of Jones twice. Jones used his jab well trying to keep Sekhniashvili off of him.

In the fifth round after a minute Sekhniashvili landed a pair of rights to the chin of Jones forcing him against the ropes. In the final minute Jones landed his first good body shot a solid right. He just didn’t do enough to take the round. In the sixth and final round Sekhniashvili landed an overhand right to the chin of Jones in the first thirty seconds trying to end the fight. Halfway through the round Sekhniashvili turned southpaw throwing every punch with mean intentions. In the final thirty seconds he went back to orthodox continuing to land well landing a roundhouse right on the head of Jones near the end of the round.

In the first round Torres was the aggressor with Perez countering well off the ropes. Perez outworked the oncoming Torres throughout the round. In the second round at the start a left following a jab from Torres landed on the chin that rocked Perez. Perez who spent most of his fights at cruiser landed well with counter punches on the oncoming Torres.

In the third round Torres walked into a solid right on the chin from Perez after half a minute into the round. Torres looked tired as he mauled Perez from corner to corner. In the fourth round Perez landed a very low punch giving Torres several minutes to recoup. He kept using his jab to control the fight. In the fifth round Perez continued scoring more than Torres who never stopped coming forward.

In the sixth and final round Perez continued to be busier than Torres who was some thirty pounds heavier and much slower. 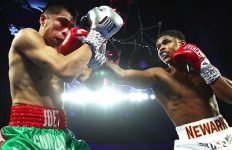