Boxing fans were left slightly disgruntled after Tyson Fury went on to finish Deontay Wilder, but then, we were left with no unification bout between the two best in the world, Tyson Fury and Anthony Joshua.

The good news is, in a recent interview with Sky Sports, Tyson acknowledged the fight between him and Joshua is what the fans want. He went on to reveal the fight will be next and the only reason it’s not scheduled for 2020 would be the contract obligation Fury has to withhold. Deontay Wilder has a 3-fight contract between himself and Fury, which will put the two against each other for the third time, completing the trilogy. 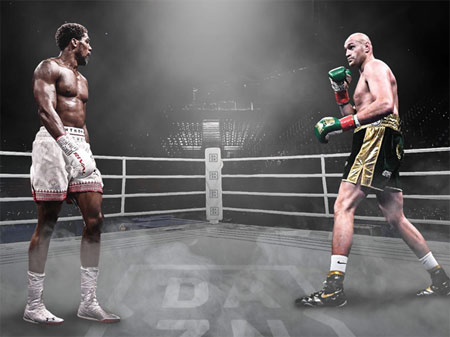 Heavyweight boxing champions Tyson Fury and Anthony Joshua will unify their boxing titles, but first, they must fulfill the contract obligations in front of them.

The coronavirus pandemic has prevented an immediate rematch, but it’s presumed the fight will take place in the latter part of 2020. Bookmakers have wasted no time in providing some available betting lines, the obvious favorite Tyson Fury is currently priced at -345 across the top bookmakers. And for good reason, the lob-sided fight which took place earlier this year left Wilder dismantled, and truly proved to the world that Tyson Fury is one of the greatest to ever lace up a pair of gloves.

With all of that said, Fury has to defeat Wilder for a second time which as we saw in the first fight, might not go down as we expect.

“If I get knocked out by Deontay Wilder, then it won’t be on, will it,” Fury told Sky Sports.

“It will be another fight with Wilder and so forth and so on. If he loses to Pulev, so close, but so far away. In heavyweight boxing, you can never count your chickens before they hatch, so one fight at a time. One victory at a time. All going well, God willing, we get on the big fight with me and Joshua, the all-British showdown and I can give the fans what they want to see, especially the British fans.

“It will be the biggest fight since I believe Lennox Lewis and Frank Bruno. It was a while ago, Cardiff Arms Park.”

Matchroom Boxing boss Eddie Hearn shot down the rumors that Wilder would step-aside to allow Fury to take on Joshua, which was previously hinted at. Joshua has a scheduled title defense against heavyweight challenger Kubrat Pulev, and that’ll be the next fight before any Fury fight talk takes place.

Joshua hasn’t been shied to voice his opinion on the matter, welcoming a fight with Tyson Fury anytime, anywhere. “If you want to prove that you’re number 1, come fight me”, Joshua told Sky Sports.

“I’ve got the rest of the belts so it only makes sense.

“I’m the unified heavyweight champion of the world, he’s the WBC champion. What will prove me and him fighting? There will be one dominant figure in the heavyweight division that will have all of the belts and become undisputed.

“Logically to prove yourself as No 1, I have to fight Tyson Fury. He has to fight Anthony Joshua.”

With Joshua lined up to fight Kubrat Pulev and Fury finishing his trilogy with Wilder, maybe the unification talks between the two are somewhat premature and god forbid one of the losses, we may never see the fight happen. So, for now, boxing fans should remain hopeful and not get too excited… just yet!