Not only does Canada’s Marie Eve Dicaire bring in an “0” in the loss column but also an “0” in her WKO column. With a record of 17-0 the IBF champion has won all of her fights by decision!

Dicaire is from St-Eustache, Quebec, Canada, and a southpaw who turned professional November of 2015 per winning her first 3 fights all in 4 round bouts. She moved up to 6 round bouts in her next 3 fights.

In Dicaire’s eleventh fight in February of 2018 she won the vacant NABF title by majority decision over Argentina’s Marisa Gabriela Nunez, 7-8-2, in her first 10 round bout. It was the first time a judge didn’t give her the win but a draw in her 11 fights.

In Dicaire’s next two fights also in 2018 in June she defeated Argentina’s Yamila Belen Abellaneda, 6-1, over 10 rounds. She followed the next month defeating Mexico’s Alejandra Ayala, 9-3, over 10 rounds.

Shields is 10-0 with 2 stoppages and will be fighting in her home city for the first time. She has fought in Detroit 4 times. Her last 2 fights have been in Atlantic City, NJ, as recently as January of 2020 winning at super welter for the first time defeating Croatia’s Ibana Habazin, 20-3. She has won world titles in her fourth fight at super middleweight and sixth fight at middleweight. Her last 6 wins have been by decision.

All of Dicaire’s fights have been in Quebec so she will be fighting in the USA for the first time. Let’s hope by May 9th boxing will be back in business! 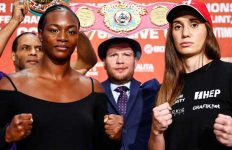 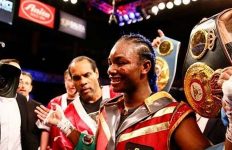