This writer recently had a discussion with a former boxer from the Philadelphia area who flew to Las Vegas for the Wilder-Fury fight with a friend.

“I was able to get to be able to get outside of Fury’s dressing room and all of a sudden he came out. I followed him to what happen to be Wilder’s dressing room. He opened the door with a small group of friends. I could see and hear what he next yelled to Wilder.

“I’m going to F…ing knock you out and drink your blood”. I was able to see the expression on Wilder’s face and knew right then and there he was shook up by Fury!”

This writer remembers before Fury fought Wladimir Klitschko back in November of 2015 I read that Fury arrived at a press conference in a Bat Man suit and using one hand leaped over a press table that had Klitschko shook!

Fury’s antics are good for boxing as far as this writer is concerned. He is a character. Even more than the former boxer Randall “Tex” Cobb was.

There is no need for a third Wilder-Fury fight. Fury won the first one though on receiving a draw and certainly from the second round on took over destroying the back-pedaling Wilder. Wilder fought scared in that second fight. For a power puncher to fight in retreat you had to wonder what his game plan was.

Hopefully Antony ‘AJ’ Joshua and Fury will face one another in a unification bout in a fight or two. 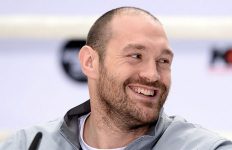