In the first round southpaw Villa controlled the round with his jab. In the second round a Villa jab made the left leg of Collado’s buckle. In the third round Villa continued to out punch Collado.

In the fourth round Villa continued being one step ahead of Collado. Near the end of the round a left from Villa on the chin of Collado almost scored a knockdown. In the fifth round Villa scored well while Collado misses most of his punches.

In the sixth round Villa had a big round punching Collado at will. In the seventh round Villa showing angles has Collado confused. Villa is very accurate with his punches. In the eighth round Villa continued staying ahead of a confused Collado hitting him almost at will.

In the ninth round the hand speed of Villa has Collado bewildered. In the tenth and final round Collado comes out swinging wildly knowing he needs a knockout. He missed with an overhand right and fell into the ropes. Villa landed several combinations sometimes 3 punch combo’s.

In the first three rounds they were close with southpaw Shelestyuk having the edge. In the fourth round Vernon was a bit busier. In the fifth round on the forehead from an accidental head butt Shelestyuk had a small cut.

In the first round southpaw Segawa used an effective jab while Hamazaryan followed him with hands held high and little offense. In the second thru the fourth rounds Hamazaryan picked up his offense. In the fifth and sixth rounds Segawa a late sub (4 days notice) seemed to outwork Hamazaryan who showboated in the sixth.

In the seventh round Segawa continued to outland Hamazaryan. n the eighth and final round Segawa got in several good lefts on the chin. 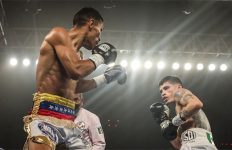 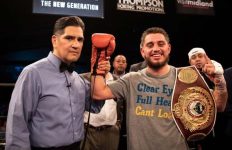