In the fourth round both had their moments right up to the bell. In the fifth round both fighters are mainly going to the body at a fast clip with O’Sullivan pressing the fight and Munguia ending the round well. In the sixth round a low left hook from Munguiaa lost a point from the Mark Calo-oy Good round for O’Sullivan.

In the seventh round Munguia landed jab after jab and followed with a left hook to the body dropping O’Sullivan but the referee said it was low. It was a war until the bell. In the eighth round Munguia continued to use and effective jab. The low blows have taken a toll on O’Sullivan as his legs show it.

In the ninth round Mungia used power jabs and going to the head looking to end the fight. In the tenth round at the halfway point Munguia hurt O’Sullivan with a counter right to the chin. In the final minute Munguia landed a vicious right to the body of O’Sullivan. Between rounds the referee asked O’Sullivan if he wanted to continue and he said he did.

In the eleventh round Munguia let it all hang out landing over a dozen punches and down went O’Sullivan who gave a gal;lant effort.

Former world champion Erik Morales is the trainer for Munguia. 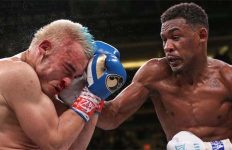 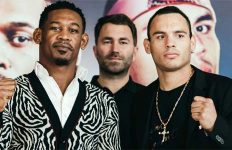 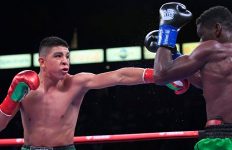