Fox, 21-1 (5), from Upper Marlboro, MD, makes his fifth appearance in Pennsylvania and will be taking on John Arellano, 10-1 (9), out of Conroe, TX, who will be looking to score the upset after defeating a pair of unbeaten boxers in his last two bouts.

At 6:03 1/2, and southpaw Fox will be a difficult opponent for Arellano whose knockout ratio is 90%. This is the boxer vs the puncher main event and always a good match-up.

Arellano stepped up his game in his last two fights starting with D’Angelo Keyes, then 7-0, who couldn’t come out after seven rounds in October of 2018. After the long lay-off he won a split decision over then unbeaten Xavier Wilson, then 10-0-1, in an all-Texas fight.

After losing for the first time in February Fox continued stepping up his game in May defeating tough Uzbekistan fighter Fazliddin “Fayzi” Gaibnazarov, 7-0, in Tucson, AZ, over 10 rounds. In September he defeated Dominican Eudy “AK-47” Bernardo, 25-4 (18), winning all ten rounds in Bethlehem, PA.

Henderson returns to the 2300 Arena since his last fight in May stopping AC’s Antowyan Aikens, 13-6-1, in the third round. For Pllana it will be his seventh fight of 2019.

King’s will keep up their busy schedule on December 14th at the Zembo Shrine, in Harrisburg, PA. 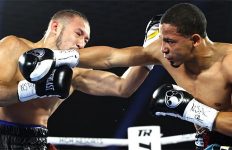