Kai has a 16-0 (13) record and is from Arendal, Norway. His trainer is former WBA World Super Featherweight and WBA World Lightweight Champion Joey Gamache, 55-4 (38), of Lewiston, MA. His promoter is Sauerland Promotions. He was a Norwegian national champion as an amateur in 2014.

Kai won his first six fights in Denmark before winning two straight in Germany. In his next fight in February of 2017 he defeated Lars Buchholtz, 27-10, by RTD 4/8, in Norway. In April of 2018 he knocked out Germany’s Frank Bluemle, 15-5-2, in two rounds in Germany.

In 2019 Kai has won three straight starting in March knocking out Rad “Thunder” Rashid, 16-4, in three rounds for the vacant IBO International title in Norway. In June he traveled to the country of Georgia and stopped their Levani Lukhutashvili, in three rounds in Georgia. In November he won a split decision over Argentina’s Mariano “El” Angel Gudino, 13-3, over ten rounds in Norway.

The 30 year-old Norwegian is 6:03 and has stayed under 200 in all of his sixteen fights. He is following in his father’s footsteps looking to crack the world rankings especially in the WBO! He is currently No. 33 in the WBC rankings.

The King and the Clown Prince→ 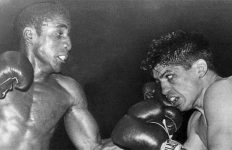