In first round both southpaws came out swinging for the fences with Fortuna getting the better of it. In a heated exchange Fortuna landed a left on the chin and down went Cuellar for an 8-count from Referee Bill Clancy. Fortuna was all over him when the bell sounded.

In the second round both fighters came out throwing punches looking for a knockout. Fortuna landed a right followed by a left to the chin and down went Cuellar for an 8-count. He was up with Fortuna all over him when the Referee Bill Clancy suddenly stopped it.

In the first two rounds Castano outlanded Omotoso who was on the defense for the most part. In the third round Castano continued coming forward with Omotoso backing up countering. Castano had Omotoso on the ropes landing a flurry of punches as the referee is on top of them looking to stop it but Omotoso is fighting back up to the bell.

In the fourth round Costano landed half a dozen unanswered punches before Omotoso landed a right on the chin. Omotoso was fighting back off the ropes when the bell sounded! In the fifth round Costano had Omotoso on the ropes landing almost at will until Omotoso worked his way off the ropes. In the corner the ring physician checked Omotoso who was complaining of an injured left should causing the fight stopped.

In the first round knocked down Karl with a right hand face first. He beat the count of Referee Bill Clancy. He managed to get to the bell. In the second round Karl got away with quite a few punches behind the head of Aguilar without a warning from Referee Clancy. Aguilar managed to get his share of punches in what looks like a couple of “amateurs!”

In the third round Karl twice hit Aguilar twice below the belt and Referee Clancy was overruled when he was going to call it a knockdown. Karl had Aguilar against the ropes hitting him between the side, back and head. Referee Clancy finally warned Karl for hitting behind the head.

In between the rounds the ring physician came in to examine Aguilar who claimed to have a broken hand. Funny, he was getting hit the entire previous round and did little on the offense. 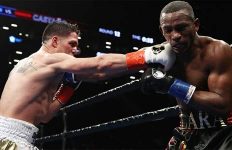 Brian Castano & Erislandy Ends in a Draw in Brooklyn Saturday!→ 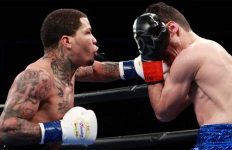