The two matches have been added to an already jam-packed card that is headlined by unbeaten Brandon Figueroa defending his interim WBA Super Bantamweight title against Javier Nicolas Chacon in a 12-round bout and rising star Stephen Fulton Jr. taking on Isaac Avelar in a 10-round super bantamweight match in the co-feature. FS1 PBC Fight Night begins at 10 p.m. ET/7 p.m. PT.

Unbeaten super lightweight contender Darwin “Pay the Price” Price meets Aaron Herrera in a 10-round bout in the main event of FS2 PBC Fight Night Prelims, which serves as the lead in to the FS1 show. Super welterweight Raymond Guajardo of San Antonio, Texas takes on McArio del Castillo of Santa Monica, California in a four round bout and Victorville, California’s Sean “Sugar Rush” García will appear in a four-round featherweight attraction to open the broadcast at 8 p.m. ET/5 p.m. PT.

Tickets for the live event, which is promoted by TGB Promotions in association with Panterita Boxing, are on sale now and can be purchased through bertogdenarena.com and/or AXS.com.

The 19-year-old Juarez (4-0, 2 KO) will be returning to fight near his hometown for the first time as a pro when he takes on De La Paz (2-2-1, 1 KO) in a four or six round super lightweight bout. Fighting out of Brownsville, Texas, Juarez is a highly decorated amateur who turned pro last September and has been on an active pace thus far. De La Paz of McAllen, Texas is coming off a unanimous decision loss to Luis Araujo Ramirez in his last fight on May 31.

Arboleda (14-1, 12 KOs) is a hard-hitting super featherweight with a good amateur background and rich boxing heritage. His father, uncle and two older brothers boxed. The 24-year-old Arboleda of Curundu, Panama is coming off a TKO victory over Jose Saant in his last fight on May 10, heading into the match against Mexicali, Mexico’s Betancourt (26-2, 13 KOs). Betancourt most recently scored knockout victory over Saul Banos on December. 22.

Born in St. Louis and fighting out of Houston, Price (14-0, 7 KOs) made his 2019 debut with a stoppage victory over Luis Eduardo Florez in April. The 29-year-old is unbeaten since turning pro in 2013 and will face off against Yucatan, Mexico’s Herrera (35-10-1, 24 KOs), who is coming off a TKO victory over Hector Barraza in his last fight on February 16.

The 19-year-old Guajardo (2-0, 1 KO) is building moment since making his pro debut on March 28 with an explosive knockout of Leonardo Mendez. He followed up with unanimous decision over Jaime Mendoza in his last fight on June 29 and will be taking on Del Castillo, who is making his pro debut.

Garcia (4-0, 2 KOs) is the younger brother of super featherweight contender Ryan Garcia. The 18-year-old Garcia is coming off a stoppage victory over Isaias Martin Cardona Gonzales on May 16. 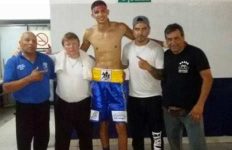