On Saturday, July 27, 2019, Ken Hissner and I, along with others, went to the memorial service for James Gibbs, Jr. There were also club members there from VBA Ring One paying tribute.

I first met James Gibbs at Frain’s Boys and Girls Club, when he would announce my boxing shows and referee. He seemed to be a very happy man and well-dressed when he came down to the club. I did 5 or 6 boxing shows at the club. James and my fighter, Greg Hackett, Sr., would always lend a hand. Gibbs would always say, when he saw me, “Get up out of that chair, boy, and fight!” That’s one thing I will always remember about James Gibbs.

Gibbs was also involved with the World Boxing Foundation. He was the North American coordinator, along with Greg Hackett, Sr. and James’ wife Leslie.

One thing that struck me the most was the testimonials given by three boxers. They were Derrick Webster, Amir Mansour, and Greg Hackett, Sr.

Mansour told how he and Gibbs met, and he thought Gibbs was just looking for something from him. But, as he found out through the years, James was a very giving guy. In a tearful testimonial, Webster described how Gibbs prevented him from committing suicide; Gibbs had found out where Webster lived and stayed with him a day and a night, entertaining him and helping him to forget about his suicidal thoughts. Hackett talked about the many road trips he and James took together, talking about life, when Leslie just wanted the two of them out of the house. These were the three main things that touched me, not knowing that Gibbs would do these things for these guys. Webster also sang a song in tribute to Gibbs.

I think Gibbs will be best known for his Big Cat Last Round Foundation, which tries to keep guns out of the hands of kids, especially in the Chester, PA area. His kids also gave tearful testimonials of their life with their father. I think Gibbs will live on, not just by his foundation, but by the people he touched in his life. I don’t think he’s gone or forgotten. I think he lives on also through his wife Leslie, and Gregg Hackett, Sr. who says, “Gibbs was a great guy.” 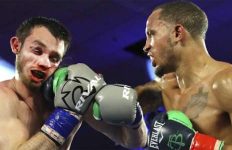