In the first round the taller Nakatani jabbed his way very well but got caught pulling away got it with punches. In the second round Nakatani missed as much as he landed as Lopez picked his spots mostly landing a left hook.

In the fifth round Lopez was getting to the head of Nakatani with right hands but still unable to get a knockout punch in there. In the sixth round Lopez start landing the left hook to the chin. Nakatani’s reach has caused Lopez problems.

In the seventh round Nakatani was warned for a third time (twice in 6th) about hitting behind the head. Nakatani seemed to outwork Lopez. In the eighth round Nakatani landed a chopping right to the head which was his best punch so far. Lopez was landing his left hook more this round.

In the ninth round of a very close fight Nakatani kept Lopez from landing the right but not the left hook. Lopez has never gone beyond seven rounds before. In the tenth round it was another close one. Nakatani continues landing the right to the head of Lopez.

In the eleventh round Lopez was getting his punches in but not having much effect on Nakatani drawing blood from his nose. In the twelfth and final round Lopez seemed to pull the fight out landing left hooks while Nakatani frustrated Lopez having a lgood chin.

In the first round Matias forced the action as Dadashev kept a busy jab while Matias was throwing punishing punches. In round two Dadashev kept moving and outworking Matias.

In the sixth round Matias kept coming forward landing more punches in the round than any of the previous five. In the seventh round it was a close one with Matias continuing chasing and Dadashev keeping busy.

In the ninth round Dadashev decided to stop moving and stay in close but Matias dealt out plenty of body shots. In the tenth round Matias continued the body work while Dadashev went back to moving and landed his share of return punches.

In the eleventh round Matias hurt Dadashev twice in the round almost dropping him in the final ten seconds. Dadashev’s trainer Buddy McGirt wisely stopped the fight between rounds. Both fighters had the marks on their faces of a tough fight. Dadashev barely made it out of the ring without the help of his corner he may not have. He was put on a stretcher heading to the hospital.

“More than anything else I want to thank God. I want to look forward to the title opportunity,” said Matias.

In the first round southpaw Falcao dominated the round as Gutierrez kept walking into his punches. In the second round both fighters did all body work with Falcao taking the round landing more.

In the third round Gutierrez had a better round but not good enough to take the round. In the fourth round after 15 seconds there was a clash of heads but no cuts. This round was like the previous round. You could count the jabs on one hand. Body work continued.

In the fifth round Falcao started landing heavy punches as Gutierrez tried covering up with hands held high but leaving his body open for Falcao to take advantage of. In the sixth round Falcao easily boxed well staying a step ahead of Gutierrez who landed the least amount of punches in the round.

In the seventh round Gutierrez finally landed several head shots. Falcao landed more head shots than in any previous rounds. referee Dave Braslow has done a fine job with few clinches just a couple of low blow warnings on the part of both fighters.

In the eighth round after a minute referee Braslow called the ring physician in to check Gutierrez who suffered a cut under his right eye. Within 20 seconds a lead left from Falcao on the chin dropped Gutierrez for a 9 count. Falcao jumped all over him having Gutierrez defensless causing referee Braslow to call a halt. Falcao won all 7 previous rounds.

In the first round McCreary’s punches were right on the money as Rosales a late sub kept coming forward. In the second round Rosales started landing good body work while McCreary was landing one shot at a time in a close round.

In the third round it was close as Rosales went to the body and head more. McCreary showed a double left hook but mostly one shot punches. In the fourth round Rosales started landing lead rights to the head of McCreary who seemed to be slowing down though slipping punches well.

In the fifth round Rosales continued to outwork back pedaling McCreary. In the sixth round it was the best one for McCreary who had Rosales on the defense for the entire round.

In the seventh round it was close but McCreary seemed to outwork Rosales with some good head shots. In the eighth and final round McCreary came out slow but picked it up after a minute outworking Rosales in a very close round and close fi, ght.

In the first round Howard started using his hight and reach but hurt Caudle with overhand right on the chin. Another right and left uppercut put Caudle thru the ropes head first and out of the ring. He just got back into the ring in time barely (19 seconds) but Chaney was all over him a final right on the chin causing referee David Braslow wisely calling a halt.

In the first round Davis outworked Howard who did more pushing and grabbing but trying to pull out the round the last 10 seconds. In the second round it was all Howard landing many more punches. He would come in with his head lowered but Davis did not take advantage of it.

In the third round Howard landing nothing but power punches hurting Davis on several occassions with head shots. Davis can’t seem to get untracked. In the fourth round Howard started slow but picked up the pace outworking Davis. Howard has a red mark on the forehead over his left eye.

In the fifth round things slowed down with Howard going to the head and Davis doing not enough countering. In the sixth round a Davis right on the chin made Howard grab him. inside of 20 seconds of the start of the round. Davis threw more punches in this round than any previous ones as Howard looks fatigued.

In the seventh round with a minute gone Howard’s trainer was asked to fix loose tape and seemed to give his fighter-son a breather with much too much tape before referee Harvey Dock told him enough. As time resumed Davis nailed Howard with a hard right on the chin.

In the eighth and final round both fighters fought like the fight was on the line. Howard seemed to hurt his right inside of the final minute not using it again. He endedrthe fight with his right eyebrow having a small cut.

In the first round Harrison used an effective jab to dominate the round. DeAngel came in 5 pounds overweight. In the second round Harrison continued to give DeAngel a boxing lesson. Coming back in 2019 after two years of inactivity he is in his third fight of the year so far after scoring a pair of stoppages.

In the third round Harrison and DeAngel threw more punches in this round with Harrison taking the round. In the fourth round Harrison received a second warning for a low blow by referee Braslow. Harrison continued using a good defense slipping punches from DeAngel and landing several good body shots.

In the fifth round with his many fans yelling “Dusty, Dusty” Harrison picked up the pace. He landed good body and head shots. Once again he ended the round up in his own corner. In the sixth round it was a big one for Harrison. He landed a hard right at the midway of the round rocking DeAngel. A flurry in the final minute had DeAngel covering up.

In the seventh round Harrison came out looking to end it with vicious left hooks to the body of DeAngel. A left hook to the mid-section dropped DeAngel for the count of 9 as he made little effort to get up. When he did he spit out his mouthpiece forcing referee Braslow to call a halt.

In the first round southpaw Davis in a close round landed good right hooks to the body. Vargas kept mostly inside of the taller Davis. In the second round the much more experienced amateur fights of Vargas kept coming forward landing head shot after head shot hurting Davis until referee Braslow saw enough waving it off.

Awaiting for an hour for the main event put a camper on this show. 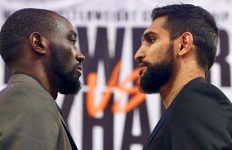