In the first round Stevenson chased the back pedaling Guevara. It was not an exciting round but Stevenson landed what little that was landed. In the second round in the final minute of the round a left lead body shot followed by a right hook to the body from Stevenson dropped Guevara to a knee. Within seconds of beating the count of referee David Fields Stevenson again dropped Guevera with a pair of lefts to the head.

In the third round Stevenson started showboating with his hands in the air trying to get the defense minded Guevara to stop running. A Stevenson lead left on the beltline hurt Guevara who turned away but got hit with a hook to the head and down he went. He took the count on his knee getting up as he was counted out by referee Fields.

In the first Potapov controlled the round with his jab not allowing Greer to get off any offense. In the second round Potapov continued using an effective jab following with rights to the body of Greer. Greer had a better round but not enough to win the round.

In the third round Potapov continued control but was warned several times by referee Earl Brown about putting a head lock on Greer the shorter of the two coming in low with his head.

In the fourth round Greer suddenly took control of the fight shutting down the jab of Potapov and countering him well. In the fifth round Greer dominated the action with a good body attack. It wasn’t until the final minute that Potapov landed some body shots of his own.

In the eighth round Potapov drew blood from the nose of Greer with right uppercuts. He’s kept Greer from doing much inside. Greer lands a combination to the body but only countering the right from Potapov.

In the ninth round Greer got inside with combinations to the body of Potapov but was hit with rights on the chin in a close round. In the tenth round Greer continued a body attack. Potapov had trouble keeping Greer from getting inside.

In the eleventh round Potapov came back keeping Greer at the end of his jab. Greer made it close but the round was up in the air. In the twelfth and final round Greer took control as Potapov ties him up eating up the clock knowing Greer may need a knockout.

“That was a great performance in the city of Newark! I want the champs Leo Santa Cruz of the WBO and Josh Warrington of the IBF,” said Stevenson.

In the first round southpaw Vargas controlled the action though got hit by several lead rights on the chin by Lopez. In the second round Vargas showed to be the one with quicker hands landing combinations on the chin of Lopez. He made Lopez miss with counter punches throughout the round.

In the third round inside of ten seconds Vargas rocked Lopez with a right hook on the chin. Again after a minute of the round Vargas landed another right hook to the chin rocking Lopez back sideways. Vargas continued to make Lopez miss time and time again. In the fourth round Vargas landed lead lefts to the chin of Lopez who was moving his upper body side to side but still getting hit.

In the fifth round Vargas was brilliant with an offense picking Lopez apart. In the sixth round Lopez was walking into punches trying to get inside. Vargas was hitting him with combinations on the chin.

In the seventh round Vargas had his way and in the last minute landed half a dozen right uppercuts on the chin of Lopez before referee Lee called a halt.

In the first round it was a lot of action with southpaw Bauza using his jab with a straight left following on the chin of Sarinana. Sarinana tried roughing Bauza up by holding and hitting but referee Murdaugh had nothing to do with him doing it. In the second round Bauza didn’t seem to have the power to keep Sarinana from coming forward. He used his footwork and jab with several right hooks to the chin that had no effect on Sarinana.

In the third round Bauza picked Sarinana apart with lead lefts from southpaw on the chin. Sarinana tried tying him up with little success. In the fourth round Bauza kept one step ahead of Sarinana going to the body. Bauza started showboating moving around the ring pop shotting Sarinana.

In the fifth round Bauza kept up the movement having Sarinana walk into his punches. In the sixth round Bauza changed his tactics staying more in front of Sarinana working the body then the head. Sarinana seemed frustrated not able to land anything to change the fight to his favor. The ring physician checked Sarinana between rounds.

In the first round Singh used his height and reach advantage keeping Snider from getting inside though he was trying his best.

In the second round Snider came out firing the first thirty seconds landing a solid left hook to the chin of Singh. Singh would come back to control with his jab for the most part though Snider kept trying up until the final seconds of the round when a right on the chin from Singh drove Snider against the ropes which the referee Murdaugh should have called a knockdown but Snider came off the ropes fighting until the bell.

In the first round Adorno the taller of the two used an effective jab. In the final minute of the round Ramirez landed a 3-punch combination. In the second round down went Ramirez from a left hook off a pair of jabs by Adorno with a pair of right uppercuts as he was hitting the canvas . Referee Sparkle Lee gave him the 8 count. A left hook to the chin from Adorno and down went Ramirez causing referee wisely to call a halt.

In the first round returning after a 22 month lay-off Rodriguez inside the first minute landed a devistating right to the chin of Herrera and down he went and was counted out by referee Sparkle Lee.

In the first round Mielnicki landed a right knocking back the head of Smith. He followed up immediately landing two left hooks and a right to the chin knocking Smith into the ropes and down for the count. Referee Murdaugh immediately waved it off calling for the ring physician. 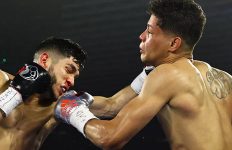 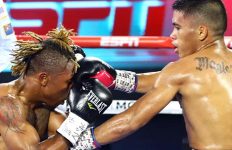