In the first round Golovkin had his way most going to the body as the tentative Rolls only used his jab for the most part backing up. In the second round it was quite competitive with Golovkin going to the body while Rolls had his moments in a close round.

In the third round Golovkin continued a body attack. Rolls best punch of the fight up to this point was a solid right to the chin of Golovkin with a minute left in the round. In the fourth round Golovkin was landing with both hands around the hands held high of Rolls to the side of his head. Golovkin hurt Rolls and dropped him with a left hook to the top of the head and Rolls hit the canvas face down. He tried to get up but couldn’t as referee Steve Willis called a halt.

“I feel great. Thank you to everyone for your support. Steve Rolls looked good and strong for a couple of rounds. I knew going back to my corner after the third round that I had to step up the pressure. Of course I want Canelo in September hopefully here in MSG,” said Golovkin.

Golovkin had a new trainer in Johnathan Banks of Kronk.

In the first round Madrimov pressed forward twice rocking Gonzalez. Gonzalez made the round competitive considering he fought 9 days prior to this fight winning an 8 round decision. In the second round Madrimov continued to show “heavy hands” hurting the veteran Gonzalez who had his moments but too few of them.

In the fifth round Madrimov had Gonzalez beat up halfway through the round causing the latter to go southpaw which made Madrimov go orthodox for half a minute. In between rounds the ring physician checked Gonzalez.

In the sixth round Madrimov tore into Gonzalez driving him into a corner hitting him until he was defensless causing referee Shawn Clark to wisely halt the fight.

“My opponent was durable and a tough guy who has been stopped only a few times. I didn’t do my best but did enough. I was asking for this title shot in my debut. As soon as my promoter gives me the chance I will be ready for a title shot,” said Madrimov. He is promoted by Matchroom’s Eddie Hearn and trained by Joel Diaz. He is managed by Vadim Korniulov. He had well over 300 amateur bouts and has a bright future. After the stoppage he did a back flip to the delight of the crowd.

In the first round the taller Akhmedov did well cutting off the ring with McDaniel moving backwards well. Akhmedov seemed to win a close round. In the second round giving away 5 inches in height McDaniel can’t seem to get away from the jab and chopping rights.

In the third round Akhmedov rocked McDaniel with a chopping right to the head of the low bending McDaniel causing referee Benjy Esteves, Jr. to halt the fight.

Adhmedov was only coming down from light heavyweight for the second time. McDaniel was only having his second fight after a 3 year layoff.

“I am quite pleased with Gennady Golovkin and my team having me fight at MSG. Thank you to everyone attending and watching tonight,” said Akhmedov. He is promoted by Tom Loeffler.

In the first round Conwell kept coming forward outworking Pennington who got in some good right uppercuts to the mid-section In the second round Pennington was warned several times for holding by referee Arthur Mercante, Jr. Like the first round this round was close but Conwell rocked Pennington with a left hook to the chin with 10 seconds to go in the round making him hold on.

In the third round it mirrored the first two rounds and again Conwell rocked Pennington in the final 20 seconds with a 3-punch combination to the head and body. In the fifth round Conwell used a good body attack while Pennington countered by lost a point for holding by the referee Mercante.

In the sixth round it was the most competitive of the fight up to this point. Though Conwell won the round from the minute to the half minute of the final round Pennington went on the offense having Conwell on the defense. In the seventh round it was Conwell getting his first warning for holding. It was another close round and Pennington’s best but might not be enough to take the round. Conwell going past the sixth round for the first time slowed down a bit in this round.

In the eighth round Pennington did well but Conwell cut him on the outside of both eyes late in the round ruled by punches by the referee though both fighters have been knocking heads while fighting inside. The ring physician was brought in between rounds 8 and 9.

In the tenth and final round both fighters mixed it up well between too many clinches with Conwell hurting Pennington with a minute left in the fight landing a right cross to the chin.

Scores were Alan Rubenstein 96-93 while both Mark Consentino and Ken Ezzo had it 97-92 while this writer had it 97-91. It was a good fight but much too much holding. Referee Mercante did a fine job controlling it. Conwell is managed by David McWater and trained by his father Charles and Otha Jones, Jr.

In the first round it was all action on both parts of the fighters. Eyubov coming forward throwing punches and Caballo countering well. In the second round the action continued but Caballo boxed well and seemed to do enough to take a close round.

In the third round Caballo continued boxing well landing more punches with the face of Eyubov showing it. In the fourth round Eyubov got in more left hooks to the body late in the round and Caballo countered well in a close round.

In the fifth round Caballo had a good round nailing Eyubov who was on the defense more than at any point of the fight. Caballo’s hands were much too fast for Eyubov. In the sixth and seventh rounds Caballo poured out much punishment having Eyubov on the receiving end for the most part of the round.

In the eighth and final round Caballo put on quite a show. Eyubov kept trying mostly with left hooks but had no answer to the performance of Caballo.

“I want to thank the fans, David McWater, Tom Loeffler. I had to take this fight to be on the Zone when Tom Loeffler offered this fight. I went to KAZ in 2016 and enjoyed it. We’re here for the long run and need to sit back and discuss the future. I want to thank all the Puerto Ricans, Dominicans for coming out and remember tomorrow is a big day,” said Caballo

He is co-managed by David McWater and Tim Van Newhouse. He is promoted by Tom Loeffler.

In the first round it was all Ababiy who quickly ended it with a lefthook to the liver of Barajas. He beat the count of Shawn Clark but fell down to a knee automatically stopping the fight.

“I believe my left hook to the body is my best punch. I believe my right hand set him up,” said Ababiy. Mangement said “we went through 17 opponents before Barajas’ management accepted the bout. 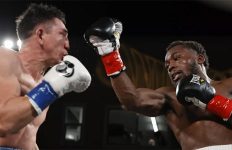