In the first round Herring had the champion missing but failed to counter with any punches. Herring did land solid body shots during the round. In the second round Ito went right hand crazy trying to hit the southpaw challenger. It was a better round for Herring.

In the third round Ito moving to his right against the southpaw was getting his foot stepped on. Herring picked Ito apart with his jab ending the round with a good move landing his jab after a Ito miss. In the fourth round Herring made Ito miss time and again making him look very amateurish. He landed numerous straight left leads to the body and head of Ito.

In the fifth round Ito was missing with wild rights while Herring countered him well. In the sixth round Herring had Ito following him around the ring. Herring landed punches with good accurate.

In the seventh round Ito continued being frustrated to the point he would grab Herring to keep him from moving so well landing punches. Ito continued to plod after Herring even slipping at times. In the eighth round Herring stayed in front of Ito allowing him to get straight punches in.

In the ninth round Ito continued to follow Herring getting hit with counter left’s on the chin. He used his jab to keep Ito at bay. In the tenth round Herring is doing everything off his jab. He’s made Ito look like he’s stepping into cement.

In the eleventh round Ito continued to walk into punches from Herring. It seemed the Herring was well ahead but you never know what the judges are thinking.

In the twelfth and final round Ito seemed more desperate than ever and somewhat tired. He plodded throughout the fight with poor footwork.

“I dedicated this fight to my late daughter Arriana whose tenth birthday would have been today,” said Herring. He also gave credit to one of his fallen Marines while serving in the war zone.

Rivera scored a knockdown in the second round. Lopez turned things around after this. 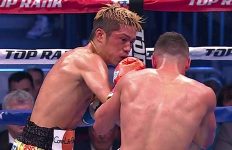