At the Kansas Star Arena, in Mulvane, KS, Friday, Dmitriy Salita of Salita Promotions and King’s Promotions over ShoBox The New Generation promoted.

In the opening round Ergashev ran across the ring taking it to Fox keeping him against the ropes. Fox seemed to regain his composure trying to use his jab. Ergashev warned for fouling Fox by referee Bill Clancy not once but twice pushing Fox to the canvas.

In the second rouind Ergashev pushed Fox down for the third time in the fight. Referee Clancy threatened him once again but taking no points away. Fox ended up lifting Ergashev up off his feet. At the end of the round referee Clancy warned Ergashev.

In the third round Fox became the aggressor. Ergashev threw few punches since the warnings. It was all Fox in the round. In the fourth round Ergashev landed a clean lead left to the chin. Fox was moving around the ring once again. Ergashev warned again though he turned away and got hit on the back of the head.

In the fifth round regained the lead and then started moving around countering with a chopping left to the head. Fox contines giving Ergashev a boxing lesson. Ergashev seems to be holding back concerned being disqualified.

In the sixth round Ergashev landed a left to the body of Fox. Fox landed a triple jab to the chin of Ergashev. Referee Clancy warned Fox of bending over making Ergashev lean on him. Ergashev seemed frustrated not having an opponent like Fox. There were too many easy fights coming into this one. Ergashev ended the round with a left on the chin of Fox.

In the eighth round Fox continued to work the ring well having Ergashev walking into his jab. The fans were not happy with this round. In the ninth round Ergashev landed a lead left on the chin of Fox. Fox has done his best to keep the distance between both of them using his jab. Ergashev continued to follow Fox around as the fans again showed their displeasure. Fox landed a lead left and ran from Ergashev the last fifteen seconds. Clancy again got too involved between rounds.

Scores were David Sutherland 96-94 while both judge’s Karen Holderfield and Jeff Sinnett scored it 98-92. This writer had it 95-95.

In the sixth round Ward landed a lead right on the chin. Ward is landing punch after punch with Hernandez trying to block them with no success. He is on the defense the entire round. In between rounds referee Clancy warned the Hernandez corner to start fighting of he will stop the fight.

In the seventh round Ward continued landing punches as Hernandez looked confused again switching stances. Ward landed a flurry of punches driving Hernandez to the ropes. In the eighth round Hernandez tried but Ward was much to fast for him. Again the referee went to the corner of Hernandez threatening to stop the fight. 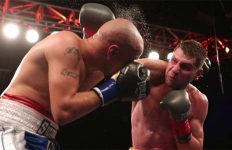