In the first round Ware forced the action with Ellis looking over anxious not as busy. The shorter Ware seemed to use his jab better than Ellis. In the second round Ellis settled down more using his reach to an advantage. Ellis never backed up jabbing and using body punching. Ellis landed a long right to the chin just prior to the bell having a better round.

In the fourth round Ellis used a good jab. Ware landed a solid right to the chin. Ellis landed several jabs followed by a right to the chin. Too many clinches in the round for referee Michael Griffin. Ellis had a better round using his jab. In the fifth round Ellis finally took the lead with Ware backing up for the first minute before Ware once again started moving forward. Ware walked into a right uppercut from Ellis. Ellis landed a solid right uppercut with half a minute left in the round. Ware with less of a reach seemed to land as many jabs.

In the eighth round Ware came out throwing but Ellis matched him punch for punch. Halfway through the round Ware landed a flurry of punches to the head. Ware never stops coming forward. Ellis landed a combination. He kept using his jab but Wade landed several solid punches up to the bell.

In the ninth round Ellis is using his jab moving backwards. Ellis came into this fight recovering from a right hand injury and has only been using it sparingly. Ware punched Ellis to the ropes but got countered well from Ellis. Inside Ware landed a chopping right to the head of Ellis who was leaning in. Ware drove Ellis into the ropes with body shots.

In the tenth and final round with Ware pressing in Ellis landed a flurry of punches to the head. Inside Ellis landed a left hook to the chin. Ellis flurried to the body. Halfway through the round Ware and Ellis mixed it up inside. In the final minute Ware bullied his way in but was not throwing punches as Ellis had him walking into punches.

In the first round Medera pushed the action with several body shots. After a minute of mostly jabs Mattice opened up with a combination. Halfway through the round Medera landed a lead right to tht chin of Mattice. Mattice came back seconds later with a right of his own to the chin. Mattice used a good steady jab while Medera threw more heavier punches.

In the third round both fighters landed rights to the chin of one another. Mattice landed a flurry of four punches. Mattice finally stayed in the middle of the ring landing a solid right to the chin. Then he started moving once again. Inside a minute left in the round Medera landed several good body shots. With less than half a minute to go referee Charley Fitch had to break up the first clinch.

In the seventh round both fighters opened up with power punches with Medera still working the body while Mattice landed a good uppercut after a variety of jabs. Medera continued working the body with Mattice jabbing and landing counter rights. This was the closest round of the fight.

In the eighth and final round Medera continued going mostly to the body while Mattice landed jab after jab. Neither fighter seemed to go all out in a very close fight being it was the final round. Mattice landed a flurry at the bell. 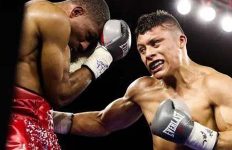 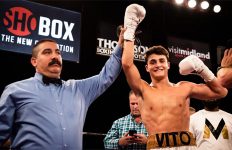