PAB HOF Cut-Man Joey Eye and Steve Rosenblum co-promoted the Philadelphia Arm Wrestling Tournament at the VBA Ring One Building on December 15th. There were quite a few of competitors.

Zack Pamillo introduced the competitors. Well known ring announcer Pat Michael Fattore did the announcing during and after the matches.

The big winner at the tournament was heavyweight Paul Linn from Harrisburg, PA, who went 20-0. Left and Right arms competing and at the end Linn took on all the lower weight competitors and defeated one and all including co-promoter Rosenblum. Others he defeated were Tom Morgan twice, Todd Ferry twice, Leron “Black Ice” Baldwin, John “Johnny Blades” Bunnon”, Norman Torpey, and Head Official Tom “Nitro” Simko” who has been a referee since 1993.

In the 160 lb weight class Leron “Black Ice” Baldwin from Scranton, PA, was the winner. He defeated Paul Martinetti who had defeated John “Johnny Blades” Bunnon, from the Poconos.

Assisting Tom “Nitro” Simko was Sue Fischer. Photographer was Jami Liei. Charley Sgrillo, VBA President and Chairman of the PAB HOF John DiSanto of Philly Boxing History were in attendance. Bar tending was former heavyweight boxer Kerry Judge. It was announced that on August 18th of 2019 the Knights of Columbus will have their 25th Tomato Festival entitled “Arms & Steel” competition in Pittston, PA. 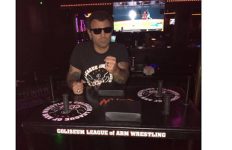 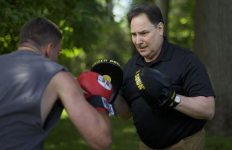 How I and Others Knew Dr. Brian Raditz→ 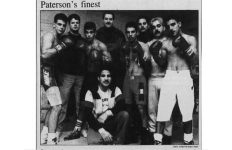