DETROIT (December 10, 2018) – Detroit-native and super welterweight contender Tony Harrison spent this past Saturday spreading holiday cheer and giving back to his hometown as he hosted a Holiday Toy and Grocery Giveaway for the third year in a row to serve the Detroit community.

Harrison is nearing his world title challenge against Jermell Charlo that is part of Premier Boxing Champions on FOX & FOX Deportes Saturday, December 22 from Barclays Center, the home of BROOKLYN BOXING™.

“This year’s event was a huge success,” said Harrison. “It just keeps getting bigger each and every year. It brings me joy to be able to contribute something to people that need our help so badly.”

Born and raised in the city, Harrison used to train in Emanuel Steward’s famed Kronk Gym and was even managed by the boxing legend early in his career. Harrison has worked hard to instill the positive messages that he gleaned from Steward and to make himself part of the fabric of the boxing hotbed.

“I’m a product of Detroit, both the good and the bad,” said Harrison. “I know how hard it is out here and what these people are going through. I know what kind of help they need and I think it’s important that they know someone from their backyard is here to fight for them.”

Harrison held the event at his Superbad Fitness Gym and helped distribute toys and groceries for nearly 400 people throughout the morning and afternoon.

“There was one particular woman on Saturday who got very emotional and just poured out so much praise for the giveaway,” said Harrison. “She was so grateful and that really touched me and highlighted the importance of this whole event for me. You could tell she was a prime example of the extreme need that exists in our community, and I was very glad we could help her.” 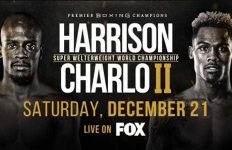 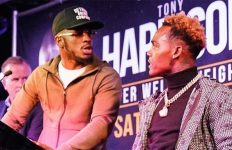