Lomachenko, 11-1 (9), will be making his first defense since winning his third weight division world title he won in May of this year. He dethroned Venezuela’s Jorge “El Nino de Oro Golden Boy” Linares, then 44-3, out of Japan, in the tenth round after coming off the canvas in the sixth round, at MSG.

Lomachenko, a southpaw, had right shoulder surgery and will be looking to defeat Pedraza, who in August won the WBO title defeating Raymundo “Sugar” Beltran, then 35-7-1, by decision, having Beltran on the canvas in the eleventh round at the Gila River Arena, in Glendale, AZ.

In the co-feature the WBO World Super Bantamweight Champion Isaac “Royal Storm” Dogboe, 20-0 (14), of Ghana, residing in the UK, makes his second title defense since winning the title in April. He will be defending against No. 2 ranked Emanuel “Vaquero” Navarrete, 25-1 (22), of Distrito Federal, MEX. Navarrete has won his last eight bouts by stoppage. 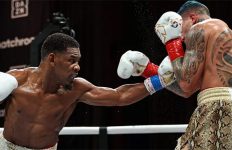