In the first round Ellis was throwing and landing more punches as Mosquera was on the defense for the most part landing few punches. In the second round Mosquera comes out throwing punches with Ellis countering while backing up. It was a close round that could have gone either way. Mosquera did better but was it enough?

In the third round Ellis is countering well with lead rights to the chin of Mosquera. Mosquera continues to force the action but is catching as much as he has landed. Mosquera was warned twice for low blows by referee Florinto Lopez. In the fourth round in another close one Ellis countered well though not with the power of Mosquera who seemed to get out worked.

In the fifth round Ellis continues to show faster hands as Mosquera was walking into many punches. During the round the corner of Mosquera yells to “go to the body!” He replied “I’m trying but he won’t let me!” It was a big round for Ellis. In the sixth round Ellis landed an obvious low blow with referee Lopez warning him while giving Mosquera a minute rest. Ellis landed a flurry prior to the bell.

In the seventh round Mosquera continued to come forward throwing few punches getting countered well by Ellis. Mosquera has bleed from the mouth and suffered a small cut on his left cheek. In the eighth round Ellis dished out a beating to the exhausted Mosquera.

In the ninth round Ellis landed a very low blow and got a point deducted from referee Lopez. Ellis comes back again outworking Mosquera. In the tenth and final round a tired Mosquera wrestled Ellis to the canvas. Ellis came right back and easily out punched Mosquera the rest of the round.

In the first round both fighters mixed it up well with neither having a solid edge in a “you pick em round!” In the second round Reyes continues to force the fight occasionally being caught by a Horta counter right uppercut to the chin. Horta landed a solid counter righ to the chin of the aggressive Reyes. Both were landing punches in bunches at the bell.

In the third round Reyes has out punched the local favorite Horta. Reyes keeps the pressure on Horta who counters well but not landing as much. In the fourth round while mixing it up Horta intentionally head butted Reyes and it cost Horta a point. At the end of the round Horta through a flurry of solid punches rocking Reyes.

In the seventh round Reyes is back being the aggressor being countered by Horta. In the final minute of the round both were in a heated exchange. In the eighth and final round Reyes continues chasing Horta and lands an overhand right to the head of Horta. Horta comes back landing heavy punches to the head of Reyes. Reyes had his mouth open for the past two round breathing heavy but still game. Horta finished strong in a war of a last round.

In the first round Nunez comes out looking for his eleventh straight knockout. Gallardo continued to move around the ring landing an occasional lead right to the chin of Nunez. The first round was entertaining. In the second round the light hitting Gallardo has landed his share of right hands to the head of Nunez with little effect. At the end of the round Nunez landed four border line punches of which a few may have gone low.

In the fifth round Nunez continues to land heavy punches to the body and head of Gallardo who has taken most of them well. Nunez countered Gallardo with a solid left hook to the chin. Gallardo came back with a right uppercut to the chin of Nunez. Gallardo continues to show plenty of heart mixing it up with the harder punching Nunez.

In the sixth and final round Nunez continues going to body and head trying for the knockout as Gallardo continues fighting back. Both were throwing punches at the bell to the delight of the crowd.

Scores were 57-56 twice and 58-55 for Gallardo as this writer had it 57-55 Nunez. For Gallardo it was his third win over an unbeaten opponent. 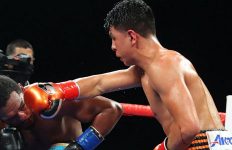 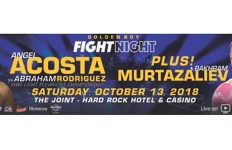 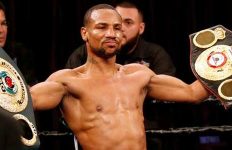 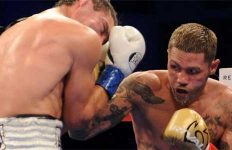