In the first round it was all Spence with great body work. He scored his eleventh straight knockout with a left uppercut to the mid-section as Ocampo took the full count of referee Lawrence Cole on his knees.

“I wish it would have lasted longer so the fans would have gotten their monies worth. I look to unify the titles,” said Spence.

In the first round Flores who came in over weight making it a non-title bout if he wins pushed the action as he was head hunting while Roman worked the body of Flores. Roman landed a triple left uppercut to the body at the midway point of the round. Flores used his reach well. In the second round both fighters were throwing punches at a rapid pace with Flores landing more though Roman the heavier punches. When Flores missed Roman made him pay with a counter to the chin of Flores.

In the third and fourth rounds Roman continued to work the body before going to the head of Flores. Flores kept forcing the fight but his accuracy isn’t as good as Roman. The best punch of the fourth round was delivered by Roman, a right to the chin of Flores with ten seconds left in the round. In the fifth round the amount of punches thrown by both were amazing. Roman got away with two left hooks to the liver but followed up with a solid right to the head of Flores.

In the sixth round through the eighth rounds the action continued with the body work from Roman seemed to be taking an effect on Flores. In the ninth round Roman turned southpaw several times during the round. Roman’s left upper cuts and left hooks to the body have been punishing on Flores who never seems to stop throwing punches.

In the twelfth and final round both fighters continued to give the fans plenty to cheer about. It was an all action bout.

In the first round both fighters who throw punches and go into a clinch the entire round. Granados even grabbed Fortuna by the leg and took him to the canvas. Fortuna was warned twice by the referee for holding. Fortuna landed the heavier punches of the two. In the second round Fortuna landed several hard left hands during the round but was warned again twice for holding.

In the third round both fighters opened up swapping punches for half a minute before the clinching started again. The taller Granados has a habit of falling into Fortuna who leans on him causing warnings from the referee. The referee took a point from Fortuna for hitting behind the head. Half a round later the referee deducted another point from Fortuna for holding. With seconds left in the round Granados pushed Fortuna through the ropes hitting the back of his head while on top of two of the ropes.

Fortuna was taken out on a stretcher complaining of head pain and couldn’t move his neck. Due to not finishing four full rounds (2:55 of the round) it was called a no decision.

“I think he was looking for a way out. I hope he is all right,” said Granados. Granados was coming down from welterweight while Fortuna was moving up to super lightweight. 38-36 was this writer’s score including the fourth round in favor of Granados. 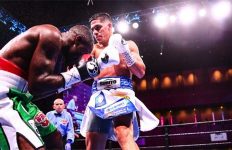