In the first round a right from Robinson on the southpaw Rojas chin dropped him. Referee Dali administered the 8 count. Rojas was up boxing out of trouble. Robinson couldn’t put him away allowing Rojas to get through the round. He was warned in the last ten seconds for throwing Rojas back toward the ropes. In the second round smaller Rojas who was obviously overmatched tried keeping his hands high to avoid the right hand of Robinson. Rojas managed to once again get through the round as Robinson seemed content to just out jabbing his shorter opponent.

In the third round it was Rojas backing up Robinson with a jab and body work. Rojas spread his arms as if to say “is that all you got?” Robinson came in with a solid right to the mid-section of Rojas. Just prior to the bell they clashed heads causing the referee to give them a minute rest with a little more than ten seconds left in the round.

In the fourth round Rojas landed a 3-punch combination while Robinson missed with a countering right. Robinson was warned for a low blow by referee Dali. Rojas landed a lead left to the body followed by a right to the body of Robinson. It looked like Rojas finally won a round. In the fifth round Robinson slipped to the canvas as both fighters tied each other up. Robinson landed a solid right to the chin of Rojas making him stumble back several steps. Rojas came right back with a flurry making Robinson cover up. Once again Rojas taunted Robinson who landed a punch as the bell sounded to the chin of Rojas.

In the sixth round Robinson landed a hard right to the chin of Rojas getting his attention. Again Robinson got in several rights to the chin getting the crowd back into the fight. Rojas stood his ground daring Robinson to come in. Robinson came in landing a good left hook to the head of Rojas. It was a big round for Robinson.

In the seventh round it was Rojas driving Robinson into the ropes only to be rocked with a Robinson left hook to the head. Robinson landed a lead right to the chin of Rojas that seemed to have little effect. Rojas shortly afterwards complaining of Robinson hitting him behind the head. In the eighth and final round Rojas came out looking to pull the fight out being well behind but Robinson was waiting for him hurting Rojas with a right uppercut to the body. Robinson was warned for a low blow by referee Dali. Rojas again was chasing Robinson looking for that one big punch. Robinson was doing little in return until Rojas landed several jabs with Robinson coming back with a right uppercut to the body. Rojas did well going the distance and making things interesting for the crowd.

Judge Hill had it 78-71 while Potaraj and Weissfeld 77-72 as did this writer for the winner.

In the first round it was Aleem dropping Bates with a combination having referee Shawn Clark administer the 8 count. Aleem hurt Bates again with a right to the chin almost dropping him but Bates survived the round. In the second round Bates worked his way back into the fight holding his own. In the third round Bates switched to southpaw stopping the aggressive punches by Aleem before going back to orthodox. Bates was countering well but Aleem got the better of the exchanges.

In the fourth and fifth rounds Bates fought his way back into the fight but still well behind. In the sixth round Bates hurt Aleem with a solid right to the chin. It was even through the round with Bates finally winning one. In the seventh and eighth rounds both fighters fought tooth and nail with Aleem pulling out a lopsided but interesting win.

In the first round the much bigger Madison (248 to 198) kept coming forward against the much smaller Del Rio hurting him with a left hook to the head driving him into the ropes. Del Rio held his own in the punch total but the difference was big. In the second round a lead overhand right from Madison rocked Del Rio. Del Rio showed a big heart even taking it to Madison and at the halfway mark landed a right to the head. Then seconds later a left to the head of Del Rio from Madison stunned him in a very good round for the fans.

In the fifth round Madison came out throwing bombs with a right to the head of Del Rio hurting him. Madison had Del Rio in a neutral corner until a Del Rio left hook stopped Madison in his tracks until the bell. The fans are cheering for the little guy Del Rio who is pushing Madison backwards. Again it was a Del Rio round. In the sixth and final round Del Rio pushed forward out hitting the bigger Madison. Madison finally landed a left hook to the head of Del Rio. Though the bout sheet said it was a 4 rounder the fight was changed to a 6 rounder. Madison is a King’s fighter and was landing well with left hooks hurting Del Rio. When the fight ended it looked like a draw to this writer.

Judge Hill had it 58-56 for Madison while judges Weissfeld and Hill scored it 57-57 as did this writer.

In the first round Okoth was the aggressor as Johnson back pedaled using his long jab. Okoth seemed the much stronger of the two. In the second round Johnson was caught by an Okoth right while Johnson was pulling back with his head up in the air. Johnson landed a combination to the body while they were in the middle of the ring. Johnson had a superior jab that he was using for the most part in the round. In the final ten seconds of the round Johnson landed a good right to the body but was countered by a left hook from Okoth to the chin at the bell. It was a very close round that could have been scored either way.

In the third round Johnson was quite effective landing with the jab but was caught by two rights on the chin from Okoth. Johnson’s jab for the most part was giving Okoth fit’s by the end of the round making him miss more than he was landing. It was a good round for Johnson. In the fourth and final round Okoth pinned Johnson into a neutral corner landing a flurry of punches. Okoth knowing he was the visitor was going for the knockout. With half a minute left in the round a Johnson right on the chin hurt Okoth. It was a close round.

Judge Weissfeld had it 40-36 for Okoth, judge Page 39-37 for Johnson and judge Potaraj had it 39-37 for Okoth. This writer had it 38-38. The referee was Dali and in the corner of Johnson was Rasheem Brown.

In an all Philadelphia bout former National Golden Glove Champion southpaw Welterweight Poindexter “Savage” Knight, 3-0 (2), went the distance for the first time in his young career but was quite impressive in defeating southpaw Vincent Floyd, 3-5-1 (2), winning all 4 rounds despite a fast beginning by Floyd.

In the first round Floyd landed a hard left uppercut hurting Pointdexter making him hold on for the better part of the following 30 seconds. By the midway point of the round it was Pointdexter having Floyd against the ropes in a typical all Philly brawl. Suddenly a left followed by a right and down went Floyd taking the 8 count from referee Shawn Clark. In the second round Pointdexter rushed out attacking Floyd and pinning Floyd against the ropes. The fans were really into this fight from the opening bell with both being from Philly. Pointdexter drew blood from the nose of Floyd by the end of the round.

In the third round Floyd tried working his way back into the fight stalking an elusive Pointdexter who seemed to bait Floyd into a trap countering him well. It was a very close round but Floyd fell short of taking it. In the fourth and final round Floyd sensing he needed a knockout was throwing leather but Pointdexter equaled him punch for punch and putting him against the ropes. Pointdexter proved to be a very smooth defensive boxer making Floyd miss while counter punching making Floyd miss while countering him well.

All three judges Weissfeld, Hill and Poturaj had it 40-35 as did this writer for the winner. Trainer Raul “Chino” Rivas was in the winner’s corner. “He’s working on new stuff and getting better and better. I have high hopes for him,” said manager David McWater. (McWater has become one of the best manager in the country and possibly having the biggest stable of boxers)

In the first round in the “battle of the beards” Ortiz seemed quicker as both fighters exchanged left hooks to the body. Ortiz landed an overhand right to the side of the head of Metchenov. Carrying his left low Ortiz landed the final punch of the round landing another right to the chin of Metchenov. In the second round Metchenov kept coming forward but was catching punches by the countering Ortiz who was much quicker a hand and foot. Metchenov pinned Ortiz against the ropes landing several rights to the chin of Ortiz. Ortiz came back bloodying the nose of Metchenov winning the round by a wide margin.

In the fourth and final round Ortiz showboated a bit with both hands to his side outworking Metchenov whose face showed the marks of the battle. The fans got into it around the halfway point of the round as both fighters were letting it all hang out.

In the opening bout of the night in an all Philadelphia Light Heavyweight bout Kendall Cannida, 2-0 (0), was credited with a knockdown as Carlos Villanueva, 0-1 (0), was sitting on the ropes receiving an 8 count from referee over 4 rounds.

In the opening round it was a feeling out round of jabs until the sound of the ten second warning from the gavel of the timekeeper when both fighters opened up. In the second round the smaller Cannida pressed the action until he ran into a Vellanueva right to the chin. Cannida landed a solid left hook to the chin of Vellanueva while he was against the ropes and followed with a right and left to the head as the round ended.

In the third round Cannida started out southpaw until Villanueva landed a hard jab to the chin that turned him back to orthodox. Cannida pinned Villanueva against the ropes with a solid right to the head. Cannida walked into a left hook to the head and went wild causing swelling under the right eye of Villanueva as the round ended.

In the fourth and final round Villanueva got more aggressive having lost the last two rounds landing a solid combination to the head of Cannida. With about 20 seconds left in the fight Cannida put Villanueva into the ropes forcing referee Dali to administer the standing 8 count angering Villanueva as he tried pushing his way back at Cannida as the bell sounded.

All three judges Weissfeld, Page and Hill along with this writer had it 39-36 for the winner. In the corner for Villanueva were Bill Briscoe and his son Billy Jr. In the other corner was Chuckie Mills with Cannida.

King’s Promotion’s Marshall Kauffman it was announced by always improving young former boxer and now ring announcer Alex Barbosa that in a week they are promoting another event at the Sands Event Center in Bethlehem, PA, featuring Readings Frank DeAlba on the 13th. President of the World Boxing Foundation James Gibbs presented Philly boxer Christopher Brooker with a championship belt from a previous fight in February with Jamaal Davis. 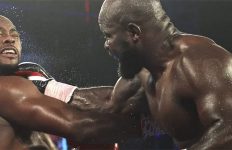