TGB Promotions over Premier Boxing Champions USA Fox Sports 1 Friday promoted four ten’s that any could be a main event at the Pioneer Event Center in Lancaster, CA.

In the first round both boxers were feeling each other out with Vargas easily outworking Herrera who hardly threw any punches. At the end of the round Vargas landed a right to the head of Herrera. In the second round Vargas opened up with a double left hook to the head of the defense minded Herrera. Herrera spent the first several minutes looking like he was shadow boxing with hardly throwing anything at Vargas.

In the third round it was more of all Vargas. For some reason Herrera is doing more bob and weaving than throwing punches. In the fourth and fifth rounds Vargas continued to box and land left hooks to the head of the defensive minded Herrera. In the sixth round while inside Herrera finally went to the body of Vargas with several body shots. Vargas came right back working the jab and halfway through the round Vargas landed a left and right dropping Herrera. Referee Jack Reiss gave him a good look and allowed Herrera to continue. Vargas didn’t go in for the finish allowing Herrera to get through the round.

In the seventh round Vargas with new trainer the former Hall of Fame boxer Michael McCallum fought very relaxed not rushing himself. His jab continued to set up Herrera. Herrera landed several body punches but was countered by a Vargas left hook to the head. In the eighth round Vargas kept the one sided bout at the end of his jab while Herrera showed a lot of wasted energy with little punching.

The three judges and this writer had it 100-89. “First of All I am happy returning on PBC. I plan to improve with my next fight and was disappointed not stopping Herrera who kept coming forward. I look forward to coming back in March God willing”, said Vargas. Being off for 13 months Vargas went back to college.

In the first round there was no feeling out with both fighters throwing bombs. The taller James used a good jab while backing up. Chaves was coming forward landing with both hands. In the second round Chaves landed a double left hook making James holding on. With a minute left in the round James finally landed a big right to the head of Chaves. Chaves comes back with left hooks to the body of James.

In the first round Molina moved forward but hardly threw a punch with the southpaw Redkach outworking him. It was halfway through the round before Molina threw a right but missed hitting the ropes. Redkach landed a good left to the chin shortly afterwards. At the end of the round Molina hit Redkach on the left shoulder and Redkach went down but referee Eddie Hernandez, Sr. called it a slip. In the second round Molina got more accurate but Redkach got the better of it. In less than a minute left in the round Redkach dropped Molina after a dozen punches with only one coming back from Molina with Redkach landing a left followed by a right to the chin.

In the third round Redkach landed a straight left to the chin of Molina making him hold on. Molina was throwing wide punches hitting air. Suddenly Molina feinted several rights and threw one on the chin of Redkach dropping him knocking his mouthpiece out. Referee Hernandez tried putting the mouthpiece back in but the corner wouldn’t come up so Hernandez put it in. It gave Redkach some time to re-coup. Molina jumped on him landed wild wide punches that Redkach didn’t seem to be able to duck. In the fourth round Molina came out firing hurting Redkach with one right hand after another to the head. Redkach tried fighting back but was overwhelmed by Molina right hands. A left drove Redkach into the referee and down he went. The referee waved it off.

It was a slugfest with Molina showing his age at 35 but Redkach couldn’t match him with his power.

In the third round Hernandez landed a solid straight right to the chin of Omotoso. After a clash of heads referee Jack Reiss checked both boxers. Omotoso went after Hernandez landing several right hands to the head. In the fourth round Omotoso being the smaller of the two had been counter punching which wasn’t his normal aggressive style. When he did come forward he did much better. Hernandez had some swelling near the left eye at the end of the round.

In the fifth round Hernandez was still the aggressor using his jab at all times. Omotoso needed to pick up his offense in the round. With less than a minute to go Hernandez was landing well backing Omotoso into a corner with no return punching. Halfway through the round it was close with Hernandez possibly holding an edge. In the sixth round Omotoso came out firing and backing Hernandez up in the first half of the round. With about a minute left in the round both boxers landed right hands to each others head. Hernandez landed a good right cross to the head of Omotoso who landed the final punch of the round a left hook to the chin.

In the seventh round the action began to pick up with Hernandez landing long rights over a good jab. Omotoso was landing with left hooks and throwing more in the past two rounds. In the eighth round Hernandez was doubling up on his jab and landed a good left uppercut to the chin of Omotoso. A left followed by a right from Omotoso had Hernandez hurt falling back and holding on when Omotoso moved in. It was a big round for Omotoso in the second half. At the end of the round Hernandez seemed confused thinking it was an eight round bout not a ten.

In the ninth round both were mixing it up good with Omotoso having an edge. Near the end of the round Omotoso accidently clashed heads with Hernandez who came out of it with a cut on the outside of his left eye. In the tenth and final round Hernandez may have sensed he was behind throwing long rights to the head of Omotoso. The fight was mostly all head punches from both.

It was a somewhat sloppy fight with neither boxer looking to be a threat to any of the champions in the super welterweight division. 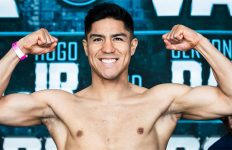 Vargas: I Will Become a Three-Weight World Champion→