Browse: Home / 2017 / November / 26 / Sergey “The Krusher” Kovalev Comes Back Reloaded and Knocks Out Shabranskyy in 2 at Madison Square Garden

Sergey “The Krusher” Kovalev, 31-2-1, 27 KO’s came back in style at The Theater in Madison Square Garden stopping Vyacheslav Shabranskyy, 19-2, 16 KO’s at 2:36 of round number 2. After turning pro in 2009 and going undefeated for seven years in 31 fights, Kovalev was dealt his first two losses by the number one pound for pound fighter in boxing, Andre “SOG” Ward, who retired after his two fights with Kovalev.

In the first fight with Ward, Kovalev lost a very controversial decision that most ringside observers felt Kovalev won. The second fight was stopped in round number 8 as Kovalev seemed to be tiring and Ward was taking over the fight, however there was still controversy because of several low blows that the referee didn’t acknowledge in close proximity to the stoppage. 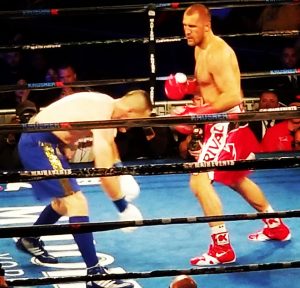 After never losing a fight as a professional, and then having to deal with the two losses to Ward, Kovalev’s promoter, Main Events did an excellent job in getting Sergey right back in the ring just seven months after the second Ward fight. This was despite the fact that several top fighters in the light heavyweight division turned the fight down.

His opponent, Vyacheslav Shabranskyy is a very tough and game fighter but one who doesn’t really have a plan B. Shabranskyy, like Kovalev, always comes to fight and had only lost once before to Sullivan Barerra in a fight where both men were dropped, but Shabranskyy was stopped in round number 7. Barerra won a unanimous decision on the undercard, however he was mentioned by promoter Kathy Duva as one of the many who did not want to take this fight against Kovalev, however, it seems he is a good potential opponent for Kovalev in the near future.

The results seemed to be the best-case scenario for Kovalev and promoter Main Events, both in the fight and in the grand scheme of things for Kovalev moving forward in the light heavyweight division. The fight ended up being for the vacant WBO championship, as well as two lesser known titles, the IBA and EBP. Kovalev dominated his opponent from the opening bell, he stated later that he had hoped to get in 5 or 6 rounds, but wasn’t going to complain that he got his opponent out of there in the 2nd round when top-notch NJ based referee, Harvey Dock stopped the fight at 2:36 of the 2nd round.

It appears that based off what Kovalev had to say after the fight that the whole experience of dealing with the losses and having to come back served as a learning experience for him. He has parted ways with former trainer John David Jackson after a lot of strange drama involving Jackson. Apparently, Sergey wanted the rematch with Ward so bad that he agreed to any terms thrown at him, which cost him in several ways after he apparently didn’t listen to Duva in negotiations because he was eager to get the fight made quickly.

While dealing with two losses back to back, the second a TKO, after never losing a fight as a professional can be something that some fighters never totally recover from; It seemed that going through the whole experience may make Sergey a better fighter. Like most fighters that Main Events has promoted over the years, he is a fighter who wants to stay active and he wants meaningful fights. He expressed his desire to fight four times a year and he also wants to fight the best fighters in the division and go after all the titles.

Kovalev is a throwback fighter who has always seemed to want to fight the best and seems to enjoy fighting and that is what makes fans enjoy watching him fight. He is not concerned with being a businessman or looking for any easy fights. Of course, he was asked about a potential title unification fight with WBC champ, Adonis Stevenson, who he has called Adonis Chickenson for years now and he said he is still interested, but it has seemed that Stevenson has ducked him for years. 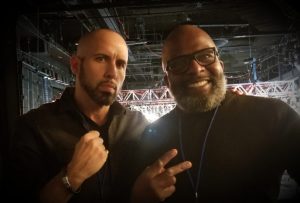 While Sergey said that he learned his lesson not to accept any terms thrown at him like he did in the rematch with Ward, he made it clear doesn’t intend to lose and be the B side of any promotion again. He said he is reloaded and that he missed boxing and almost hinted that he may have taken things for granted at times in the past and moving forward that he will be putting his all into boxing, not taking any shortcuts and he is more focused with his new trainer.

Kovalev and Duva mentioned a tentative date they are already working on, March 3rd, possibly back at Madison Square Garden and Kovalev made it clear he wants to fight only the best, so whenever and wherever his next fight is, it will be something to look forward to.

Kovalev Stopped by Alvarez for the WBO Light Heavy Title in Vegas!→