2018 looks set to be a headline year for heavyweight boxing.

Unification bouts are looming for the unbeaten trio of Anthony Joshua, Deontay Wilder and Joseph Parker, and there’s a good chance there could be a first undisputed heavyweight champion of the world that this millennium has seen.

If Eddie Hearn can manage all three egos sufficiently – which in itself is a heavyweight contest – an early spring match-up between Anthony Joshua and Joseph Parker – with the WBA, IBF and WBO titles all on the line – could well take place, followed by a superfight with between Joshua (assuming he wins) and Wilder in the summer to create a unified champion.

The Return of Tyson Fury

Then there’s just the not-so-small matter of 6’9 Tyson Fury. 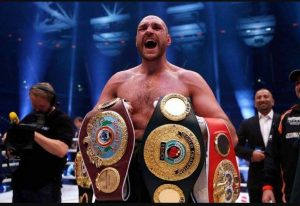 Should they meet, Fury is a 6/4 shot to beat Anthony Joshua for those who bet online. Fury, ‘The Gypsy King’, is expected to return to the sport in 2018, following the completion of his drugs ban after testing positive for benzoylecgonine (the central compound of cocaine) by the Voluntary Anti-Doping Association (VADA) ahead of a rematch with Wladimir Klitschko in 2016.

Fury shook the world at the end of 2015 by beating Klitschko, and thereby inflicting a first defeat in over 11 years upon the Ukrainian – winning the WBA, IBF, WBO, The Ring and lineal heavyweight titles in the process.

Of course, if Fury has his way, he may face Joshua even earlier in a unification bout. The 29-year-old has his eye on a fight with Deontay Wilder in March, meaning the winner of the fight would likely line up for one of the biggest boxing matches this generation has seen come the summer – assuming everything goes to plan – which it admittedly rarely does in the wacky world of boxing.

Wilder is unlikely to accept a bout with Fury before Joshua though, so Fury may have to wait until the end of 2018 to pit himself against Britain’s golden boy of boxing. But that’s not necessarily a bad thing.

As 2017 draws to a close, Tyson Fury is extremely out of shape – having not fought since his famous Klitschko victory over two years ago.

Fury is notorious – among other things – for his fluctuating weight between fights. So, the more time he can have to get fit – and get his sharpness back – the better for the Manchester-born fighter.

Even a spring bout against Wilder would likely come too early for Fury, so if he could get one or two ‘warm-up’ contests before a huge Autumn/Winter fight with Joshua, it would suit him massively.

Potential fights for Tyson Fury in the coming months could well come against Liverpool’s David Price or 45-year-old Shannon Briggs – both of whom you would expect unbeaten Fury to overcome.

Regardless of how the fights between the other champions pan out (let’s not forget that Fury is still The Ring title holder), the biggest questions of Fury can only be answered by himself: can he get fit, stay fit and then remain active in 2018?