The weigh-in for this show will begin at 3:00PM and the first bout will begin at 5:00PM. We will have an early start to accommodate the Barclay Center show.

All our bouts are sanctioned by USABoxingMetro. All boxers must have their boxing book with them in order to participate.

The ticket price is $20 per person. Children 6 and under are not charged. All gym members and registered amateurs with their books in hand pay $15 per person.

Boxing returns to Barclays Center with a world championship triple-header on Saturday, October 14.

Plus, former title challenger Tony Harrison (24-2, 20 KOs) will return to the ring in a 10-round middleweight bout against Paul Valenzuela Jr. (20-5, 14 KOs) as part of an exciting night of undercard bouts. 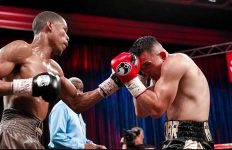 Hitchins, Hunter and Pllana win in Vegas on ShoBox Friday!→