BAKERSFIELD, CA. (July 30, 2017) – Former world champion Victor Ortiz (32-6-2, 25 KOs) made his ring return in style with a fourth round stoppage of Saul Corral (23-10, 14 KOs) in their welterweight battle that headlined Premier Boxing Champions on FS1 and FOX Deportes Sunday afternoon from Rabobank Theater in Bakersfield, California.

Fighting for the first time since April of last year, Ortiz was sharp from the start and attacked Corral with straight left hands and hooks. Corral was game and fired back uppercuts, but was too often on the short end of their exchanges.

“Corral is a great fighter who hits hard and I definitely felt it,” said Ortiz. “Top of the line boxers like myself, we hang in there and we perform to the best of our abilities. It was my first time back in a while and it’s just the beginning.”

Ortiz had success stalking Corral towards the ropes and unloading, focusing on delivering those powerful straight lefts and hooks. Corral tried to keep Ortiz at bay too often by holding onto his left arm, and after multiple warnings from referee Jack Reiss, he was deducted a point in round three.

“There’s nothing easy about going up against a guy like Saul Corral,” said Ortiz. “We were better tonight. We worked hard and I’m thankful to my team for getting me ready.”

The southpaw Ortiz was again able to trap Corral against the ropes and midway through the fourth round he connected with the decisive left hand that sent Corral into a heap on the canvas. Corral was able to get to his feet and briefly continue, but Ortiz quickly pounced and forced the referee to stop the bout 1:26 into the round.

“There are a lot of names out there in the welterweight division,” said Ortiz. “At this point I’m going to let my team guide me, because I’ll always be ready for anybody.”

Both men looked to implement their game plan in round one, with DeLoach throwing combinations off his jab, while Gallimore looked to close the distance and attack the body. Late in the first round, Gallimore drew DeLoach in and got the better of an exchange of left hooks that sent DeLoach crashing to the canvas.

While DeLoach was able to hold on and survive the round, he was sent to the mat again late in round two from a series of powerful hooks. DeLoach was able to stop an oncoming Gallimore in his tracks with a left hook right before the bell, but it was one of his last significant moments in the fight.

Gallimore continued to close off the distance and blasted DeLoach consistently with strong uppercuts, while DeLoach tried to stay busy, but simply lacked the power on his punches to slow Gallimore down.

Late in round five, Gallimore connected with an overhand right that staggered DeLoach and followed it up with more effective uppercuts. DeLoach was again able to make it to the bell, but had endured too much punishment and the bout was officially stopped after five rounds at the advice of the ringside physician.

The opening bout of the telecast saw 2016 U.S. Olympian Karlos Balderas (2-0, 2 KOs) deliver a devastating knockout of Eder Amaro Fajardo (3-4, 2 KOs) via a vicious body shot in the first round of their lightweight bout.

Balderas controlled the action, ripping right hooks to the body off of a strong jab as Fajardo attempted to return fire against the slick prospect. Balderas followed up a series of left hooks to the head with a left to the liver that put Fajardo on the canvas for good at 1:36 into the first round. 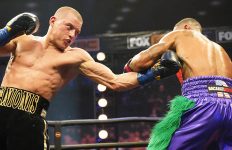 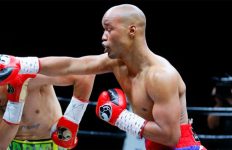 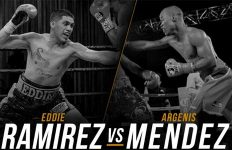 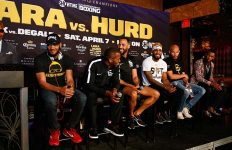