INDIO, Calif. (June 30, 2017) In one of his best performances yet, the still undefeated and newly crowned NABF Bantamweight Champion Oscar “El Jaguar” Negrete (17-0, 7 KOs) overpowered the rugged and resilient Sergio “Frio” Frias (18-7-2, 9 KOs) with a technical knockout victory in the main event on Golden Boy Boxing on ESPN live from Fantasy Springs Resort Casino on ESPN and ESPN Deportes.

“I want Caballero next,” said Negrete, calling out Randy  “El Matador” Caballero who was scheduled to fight in the main event originally. “Tonight with Sergio Frias, I knew I was winning the fight; it was more of waiting for either the knock out to come about or get the unanimous decision. I felt like my jabs were the most effective, because after watching his fight against Archinean, our team noticed that he didn’t move his head a lot. There’s a couple more of these belts that I need to add to my career.”

“El Jaguar” was focused and in control of the fight, catching Frias on the ropes in several stand and deliver exchanges attacking the body consistently. In the last couple of rounds, Frias attempted to claw his way back, nailing Negrete with a couple of uppercuts that stunned “El Jaguar”. It was a heavy exchange in the eighth round that cause Frias to become unstable, and before the ninth round could commence, Frias’s corner called the fight, awarding the technical knockout win to Negrete.

In the co-main event, super lightweight contender Ryan “Blue Chip” Martin (19-0, 11 KOs) of Chattanooga, Tennessee participated in a 10-round slugfest against Marcos “El Tigre” Jimenez (22-8, 15 KOs) of Santo Domingo, Dominican Republic. The two fighters went toe-to-toe with each other, however Martin managed to outclass his opponent.

“He was a tough, very defensive fighter,” said Ryan Martin. “It was hard for me to get him to open up because he would only throw a shot once he knew he could land it clean. This was my first time going the full 10 rounds, and by the eight, I was like ‘darn, he’s still standing?!’ Overall, I felt that I could be more consistent with my style, and I wish I would have listened to my coaches more while I was in the ring, but I am satisfied with my performance and despite not getting the knock out, I’m glad that I got the win.”

Heavy-handed Genaro “El Conde” Gamez (5-0, 4 KOs) from San Diego, Calif. demolished Devon Jones (2-5, 1 KO) of Fairfield, Calif. in a scheduled four-round match-up of lightweights that only made it to the 1:04 mark of the first round. “El Conde” handled his business with two knockdowns: the first with a left hook, the second a finishing blow of an overhand right.

“We were the swing bout, so I tried to send everyone home as early as I could,” said Genaro Gamez. “Of course I’m so excited for this win, I’m trying to keep my knock out streak alive.”

Retaining his unblemished record and champion title, WBC Youth Super Featherweight Champion Lamont Roach, Jr. (14-0, 5 KOs) dazzled the crowd with his skills in the ring against Sonora, Mexico’s Jesus “Chuito” Valdez (20-3-1, 9 KOs) for their 10-round super featherweight bout. Valdez landed impressive uppercuts that sent the crowd gushing for more, however Roach, Jr. went straight to the body, and worked-in his swift power combinations. In the last round, Roach gave a beating to Valdez, chipping away at him with consecutive blows to the head, leaving the resilient Mexican unbalanced. The judges scored the bout unanimously in favor of Roach, Jr. with scores of 100-90, 98-92, and 97-93.

“The icing on the cake would have been if I could have knocked him out, so I feel like this was an okay performance,” said Lamont Roach, Jr. “He was a tough opponent, and he was able to catch me a couple of times.”

Welterweight KeAndre “The Truth” Gibson (17-1-1, 7 KOs) made a comeback from the first loss of his career taking on Zurich, Switzerland’s Dennis “Dennis the Menace” Dauti (14-3, 7 KOs) in eight-rounds of non-stop action. The hungry fighters both pressed on aggressively, engaging in heavy exchanges, however “The Truth” was always a step ahead, utilizing his height and reach to his advantage. Dauti was unable to properly adjust to Gibson’s style, but nevertheless, was able to step into moments of dangerous exchanges. The judges scored the bout at 80-72, 79-73, 77-75, awarding the unanimous decision to Gibson.

“This fight gives me a confidence boost,” said KeAndre Gibson. “Most fighters who come from overseas are pretty awkward in their styles, and he was no exception – he had strange head and shoulder movements that could have become accidental head-butts. I just want to be able to get those tough fights, so I think this puts me back in there.”

Hot off his professional debut, Luis Feliciano (2-0) from Milwaukee, Wisconsin and fighting out of Rancho Cucamonga impressed the crowd with his easy conquest over Baltazar Ramirez (3-3, 3 KOs) of Ciudad Juarez, Mexico. In the six-round super lightweight bout, Feliciano displayed his growing ring generalship, preventing Ramirez from landing any significant punches with his effective counter punching. All three judges scored the bout accordingly with scores of 60-54.

“I feel like we came in and we executed the game plan just how we had trained,” said Luis Feliciano. “I wasn’t sure what type of fighter we were getting, and once you’re in the ring styles change. He was a tough guy, and he took a lot of my punches.”

Opening up the card, Philadelphia’s Damon “No Smilin” Allen (12-0-1, 5 KOs) battled ring veteran Gamaliel “El Platanito” Diaz (40-17-3, 19 KOs) in a scheduled eight-round super lightweight match that made it to the sixth round. Allen showed growth from his previous fights, forcing Diaz to taste the mat various times throughout the bout. The doctors called the fight during the sixth round, due to an accidental head-butt, forcing the judges to go to the cards. The scores were 57-56 for Diaz, 58-55 for Allen, and 57-56 for Allen, awarding “No Smilin” the split decision victory.

“I don’t know if it was actually a head butt that he got from me, I just remember going off on him and unleashing my punches,” said Damon Allen. “It doesn’t matter if it was a split decision or if it would have ended unanimously – I was going to win regardless. I love taking on veteran fighters for this reason. I feel that I learn a lot about my skills and how to improve for the better.” 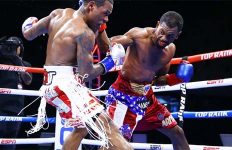