At the Bayonne Pavillion, in Bayonne, New Jersey, boxing returned to Bayonne for the first time since 1978 some 38 years ago. Nick Jaynes LGM Promotions brought boxing back to Bayonne!

In the Main Event southpaw Alex “Brick City Bullet” Perez, 18-3 (10), of Newark, NJ, and southpaw Juan “The Beast” Rodriguez, Jr., 13-4 (5), of Union City, NJ, put on a great fight for the vacant IBU World Welterweight title with Rodriguez taking a split decision. It was originally called a draw before judge Lawrence Layton’s scorecard was re-checked. Half the people left the building thinking it was a draw.

In the opening round Perez was doing his thing until a right hand from Rodriguez caused Perez’s glove to touch the canvas counting it as a knockdown by referee Dali. Perez was not happy with the call. In the second round Rodriguez rocked Perez making him hold on. Perez is doing fine boxing but the shorter Rodriguez is getting power punches in. In the third round it was much closer but Rodriguez is continuing with the heavier punching. Rodriguez suffered a small cut on his forehead due to an accidental head butt. In the fourth round Perez pinned Rodriguez in his own corner landing half a dozen unanswered punches.

In the fifth round Perez was getting the better of it but Rodriguez landed a power punch left uppercut just prior to the bell. In the sixth round Perez had Rodriguez holding on after landing several combinations. A right hook by Rodriguez stunned Perez who continued to be the aggressor. Rodriguez continued to dig to the body. The fans have been vocal from the opening bell. In the seventh round Rodriguez opened the round landing a hard right to the chin of Perez. This caused Perez to put on a power show dropping Rodriguez in the corner. Upon Rodriguez rising from referee Dali’s count Perez jumped on him and continued to score well but Rodriguez is never out of the fight. This has turned into a great fight. This fight is going down to the wire. In the eighth and final round Rodriguez has stunned Perez on several occasions countering well. Perez continues after Rodriguez as the fans are on their feet.

In the opening round Wright was a little more active keeping the fight inside than Thompson was. In the second round there is a lot of holding keeping referee Dali busy. Wright is busier but Thompson got his licks in. In the third round Wright continues to throw more punches all to the body.

In the opening round it was all Bauza using the jab. Midway through the round Bauza landed a 4-punch combination. In the second round a lead left by Bauza to the jaw of Carmona stunned him. Carmona was doing quite a bit of “rabbit punching” when the fighters got tied-up. In the third round it was more of the same with Bauza in complete control. In the fourth and final round Carmona was holding trying to go the distance and he made it.

Middleweight Magdiel Cotto, 5-0 (4), of Comerio, PR, won an easy 4 round decision over southpaw Jermaine Corley, 0-1 (0), of Concord, NC, who showed plenty of guts hanging in there.

In the opening round it was all Cotto except for a low blow with referee Bashir giving Corley several minutes to continue. Cotto hurt Corley with a solid left hook to the chin making him hold on. In the second round Cotto landed three right hands to the mid-section of Corley. Cotto hurt Corley with a combination to the head forcing him to hold on again. Cotto is killing the body of Corley who dropped his mouthpiece for the second time in the round getting a warning from referee Bashir. In the third round Corley finally puts up some offense landing a 3-punch combination to the chin of Cotto. A right uppercut by Cotto to the mid-section of Corley doubled him over. He dropped his mouthpiece for the third time causing referee Bashir to take a point away from him. Somehow Corley made it to the bell taking a beating to the body by Cotto throughout the entire 4 rounds.

In the opening round the much taller Plevako used a long jab while Cruz was throwing overhand rights. A solid left hook to the chin by Plevako got the attention of Cruz. In the second round Cruz landed a solid overhand right to the chin of Plevako. In round three both boxers threw right hands with Plevako’s getting there first to the chin. It was a big round for Plevako while Cruz did more pounding on his chest than on Plevako. In the fourth and final round Cruz landed a double left hook to the chin of Plevako while against the ropes. This was the best round of the fight and the fan’s got into it. Plevako finished strong. Plevako had boxed in the World Series of Boxing.

In the opening round Hernandez set the pace with left hooks to the body. In the second round White switched to southpaw trying to already protect the right side of his body that was taking a pounding. Hernandez continued taking it to White. In the third round Hernandez continued out punching White who was trying his best. In the fourth and final round they clashed of heads. The referee called a time out and ruled a DQ for White not listening to his commands. 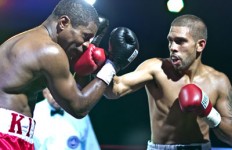 Rodriguez: “My Last Televised Fight was a Fluke!”→ 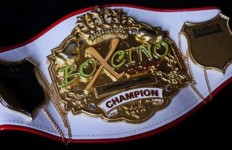 The Boxcino Championship Tournaments are Back for 2015 on ESPN2→ 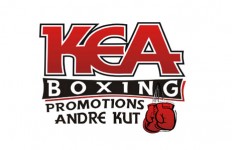 Mack and Rodriguez Return to NJ in KEA Card→ 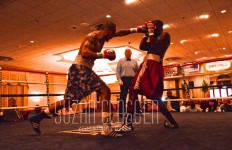