Lomachenko’s winning of a second world title pleased his promoter Bob Arum of Top Rank who called him the greatest boxer today.

The show at Madison Square Garden Saturday night also had Olympian Felix Verdejo, 22-0 (15), of San Juan, PR retaining his WBO Latino lightweight title with a TKO at 2:40 of the fifth round stopped by referee Mike Ortega. Juan Jose Martinez, 25-3 (17), of Mexico City, MEX, was not able to defend himself.

At Turning Stone Resort & Casino in Verona, CA, Demitrius Andrade, 23-0 (16), of Providence, RI, scored 3 knockdowns in stopping Willie Nelson, 25-3-1 (15), of Cleveland, OH, in the 12th and final round when referee Dick Pakozdi stopped the elimination bout in the super welterweight division. He will meet Jermell Charlo for his WBC world title.

Provodnikov admitted afterwards that he knew he lost to Molina. He expected more boxing than slugging it out which seemed to favor the winner Molina. 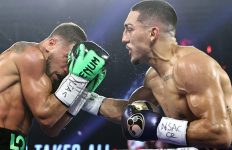