Opening the SHOWTIME CHAMPIONSHIP BOXING® tripleheader is a battle for the vacant WBC Lightweight World Championship between No. 1 ranked Dejan Zlaticanin (17-0, 10 KOs), of the Southeastern European country of Montenegro, and WBC No.-ranked
Also on June 11, former world title challengers, Willie Monroe Jr, (19-2-0, 6 KOs), and John Thompson, (17-2-0, 6 KOs,) will meet in a 10-round middleweight bout in the main event on SHOWTIME EXTREME® (7 p.m. ET/PT). In the SHOWTIME BOXING on SHO EXTREME® opener, heavyweight Andrey Fedosov (28-3, 23 KOs) takes on Mario Heredia (11-1, 9 KOs, 1-2 in WSB) in a 10-round heavyweight bout.
Tickets for the live event, which is promoted by Banner Promotions, Inc., are priced at $85, $60, $45 and $35 and are on sale now. Tickets can be purchased in person at the Turning Stone Box Office, by calling 877.833.SHOW, or online at Ticketmaster (www.ticketmaster.com). 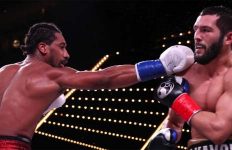 Demitrius “Boo Boo” Andrade Stops Akavov in the Final round at MSG in New York!→