In the rounds two through four Seldon rocked Edmond with overhand rights to the head. Edmond did too much holding and was warned by referee Alan Huggins throughout the match finally forcing him to take a point away from Edmond in the fourth round. In the fifth round Seldon continued to hurt Edmond who had no quit in him with right hands to the head.

In the sixth and final round Edmond came storming out as he needed a knockout to win. Seldon rocked him midway through the round forcing Edmond to grab Seldon around the mid-section and almost force him into the ropes and almost out of the ring. With about 15 seconds left in the round Seldon dropped Edmond to a knee with a short right to the chin. Seldon’s father former heavyweight champion Bruce Seldon was standing back at ringside not coming into the ring until the decision was announced. His former manager Jim Kurtz who is now in the younger Seldon’s career was also in the ring.

In the co-main event cruiserweight Chuck “The Professor” Mussachio, 19-3-2 (5), of Wildwood, NJ returned after 40 months to avenge a draw with Willis Lockett, 14-17-5 (5), Takoma Park, MD, leaving no doubt the winner this time around.

In the sixth and final round it was close with Lockett knowing he may need a knockout in front of Mussachio’s home crowd landing jabs for the first time and throwing wild rights. Mussachio was outweighed by some twenty-two pounds at Thursday’s weigh-in. The referee was Ricardo Vera. After Lockett left the ring Mussachio took the microphone and thanked all the fans for coming out. He always enters and leaves the ring with a Frank Sinatra look alike black hat and entering to the “Fly Me to the Moon” by Sinatra. It’s always refreshing hearing it instead of all the rap crap.

Judges Kinney had it 60-54, Hill 58-56 and Page 59-55 while this writer had it 60-52 all for Mussachio. “It was good to be back. A little rust but I felt good coming back,” said Mussachio. “No more heavyweights,” said Al Mussachio. He and Bill Johnson work the corner and always have cut-man Joey Eye in there with them. Mussachio is a teacher and always has a good following.

Welterweight Adrian Wilson, 0-3 (0), Atlantic City, NJ, met up with a special southpaw in Quan “The Boss” Johnson, 1-0 (1), Cherry Hill, NJ, who scored 3 knockdowns in stopping Wilson at 2:15 of the fourth and final round.

Johnson scored a pair of knockdowns in the first round. In the second round Davis came out strong but paid the price as Johnson rocked him with a left to the chin. Davis suffered a bloody nose in this round. In the third round Johnson had the edge as things started slowing down a bit. In the fourth and final round a counter left by Johnson hurt Davis who was coming forward and dropped him again. There was no quit in Davis. Johnson rocked Davis several more times with lefts to the head while referee Ricardo Vera suddenly stepped in and waved it off to prevent Davis from suffering anymore damage. Johnson looks like a good prospect.

Both fighters had their moments in the first two rounds. Maye took the first with Davis taking the second round. In the third round it was all Davis. In the fourth and final round Maye seemed to want it more.

Judge Kinney scored it 39-38 for Davis while Hill and Page had it 38-38 as did this writer. The referee was Eric Dali.

Bantamweight Olympic alternate Luis Davila, 1-0 (1) had another debuting opponent and the difference was like night from day. Davila in the second round knocked Dominic Whitehurst down three times causing referee Dali to call a halt at 2:34 of the round. Davila had many fans in the audience.

In a bout filled with more holding at times than fighting especially by Kisner. He finally lost a point in the seventh round by referee Eric Dali. Both boxers were spent after 4 rounds.

The next promotion by Rising Star is July 22nd and should have Mussachio and Seldon on the card and the possibility of Thomas “Cornflake” La Manna would be nice. 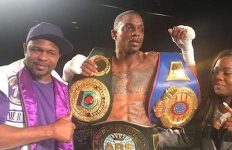 “Take it to The Bank” Webster Captures a Unanimous Decision→ 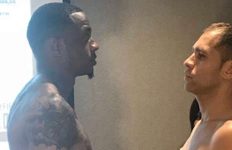 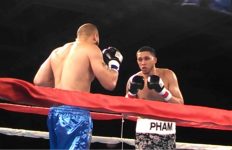