All Events Are Open To The Public!

Canelo and Khan will kick-off a three city, international press tour in London on Feb. 29 that will travel to New York on March 1 and end in Los Angeles on March 2.

Canelo vs. Khan, a 12-round fight for Canelo’s WBC, Ring Magazine and Lineal Middleweight World Championships, is promoted by Golden Boy Promotions in association with Canelo Promotions and sponsored by Cerveza Tecate, BORN BOLD, O’Reilly Auto Parts and Casa Mexico Tequila. The mega-event will take place on Saturday, May 7 at the T-Mobile Arena in Las Vegas and will be produced and distributed live by HBO Pay-Per-View beginning at 9:00 p.m. ET/6:00 p.m. PT.

Kovalev Stopped by Alvarez for the WBO Light Heavy Title in Vegas!→ 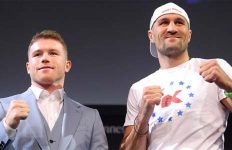