Plainview, New York’s Tommy “The Razor” Rainone may not be a household name when it comes to boxing. But the blue collar fighter who has amassed a 22-5-1 record since turning pro back in 2006 is getting the opportunity of a lifetime when he headlines Roc Nation Sports’ first boxing card – titled throne boxing – on January 9th at The Theater at Madison Square Garden when he faces unbeaten rising prospect Dusty Hernandez-Harrison (24-0) for the vacant WBC Continental Americas title. For Rainone, who is well aware what he’s up against, this is a chance to put his name on the map while derailing the hype train of Hernandez-Harrison in front of thousands of viewers who will tune into the Fox Sports One telecast. Life+Times caught up with Rainone after putting in hours during his regular job to discuss the upcoming fight, his up and down career and more.

Life+Times: You have a pretty bizarre schedule that took a minute for us to coordinate this interview.
Tommy Rainone: Yeah, I work overnight from 11pm to 7am doing audits for the Hilton Hotel. My days are backwards, while people are working I’m doing my running around and when they sleep, I work. I wake up at 1pm go for a run, rest and hit the gym at 6pm at night.

L+T: How do you balance work and training?
TR: What people don’t know is that 95% of professional fighters work a regular job. I would love to be in that position where I don’t have to work and can train. A lot of times this is just a grind. I may be able to get in an hour nap before work. A lot of times I’m depleted and tired. But I’m used to it and have done it my whole life since the amateurs. It’s all I know. It’s not a big deal to me. Even if I had the opportunity to box full time, I wouldn’t know what to do with all this free time. I’m just used to hustling.

L+T: So, let’s take it back to the beginning: What drew you to the sport of boxing?
TR: I saw Rocky as a kid and was crazy about the movie. I wanted to be a professional boxer but in the 80’s there was no Internet to find out where a boxing gym was. My family hoped it was a phase. I did things that kids do like play baseball but in the back of my head I always wanted to be a professional fighter. It wasn’t until I was 17 and I located a gym but I didn’t have a way to get there so I got rides from friends or walked. I would have started a lot earlier if I could have. When I was 10 years old I’d beg my grandparents to order the Evander Holyfield pay-per-views. I was a huge fan before I started fighting. I knew who all the players were in the game at 10 years old.

L+T: What do you know about your opponent Dusty Hernandez-Harrison?
TR: I had seen him a couple times on ESPN earlier in the year. He’s not a killer but he’s a good solid fighter. He’s 20 years old and you can’t expect too much from a kid who turned pro at 17. I think he’s right where he’s supposed to be in this stage of his career. This is a step up fight for him and I’m going to give him all he can handle. He knows how to use his height and reach but I see some things I can definitely exploit.

L+T: He’s obviously here to make a statement. But how do you avoid being just another name on his resume.
TR: Listen, I know why I was chosen. They look at me as a step towards credibility. I’ve never been stopped or dropped and have a decent record. The durability is there and they look at me as a guy who can’t punch because I only have four knockouts. That’s the black and white of it. The grey area is that I can’t tell you how many times I’ve dropped a guy a couple of times in a fight and walked away with the decision victory. I get people’s respect with my power regardless. It can change the complexion of a fight and keep guys honest. My job is to do what I do. I can’t be too concerned with him and what he may do. I’m familiar with his style but I don’t go crazy looking at video because what you see in the ring and what you see in person are two different things. All my fights are the same; I do my thing and adjust. I’m going to figure it out. It’s not the first time I fought a guy that’s bigger than me and it certainly won’t be the last.

L+T: Your record is deceiving. You have five losses and a draw but it seems like you’re always getting the short end of the stick from judges…
TR: Yeah. I’ve lost five fights out of 26 but four of those fights all came in a quick span. If you look at my last fight in the Dominican Republic (a draw against Juan Carlos Santos), it was one of the shadiest situations that I’ve dealt with ever. The night of the fight we almost pulled out of the fight three separate times from issues with the gloves to them trying to change the number of rounds. We agreed to a six round fight and I was winning three of those first four rounds. But as soon as the 4th round ended, the referee waved the fight off. I thought he had quit on the stool. They were trying to get him out of his corner and the promoter stepped into the ring and started talking to the referee. I didn’t know what was going on and then they waved the fight off and called it a draw. But like my trainer told me, it could have been worse. I could have lost. But I won’t be going back to the Dominican Republic anytime soon unless it’s for a vacation.

L+T: What will a victory against Harrison do for your career?
TR: He’s one of the biggest prospects in the country so beating him on national television would be huge. A win over him can get me a fight with Andre Berto or somebody like that. I’m not even thinking about what January 10 looks like. I’m just focused on this fight and not beyond it. 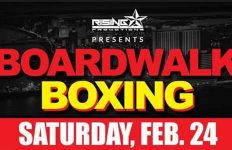