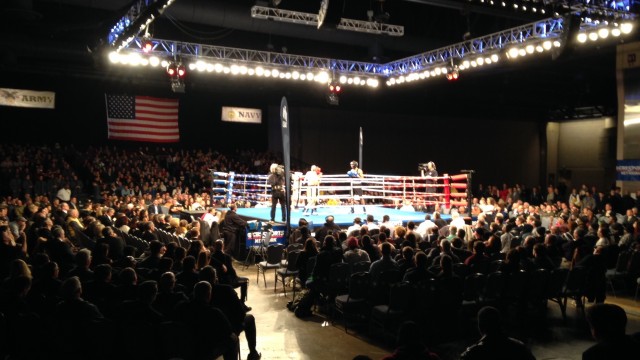 On Friday December 13th Army and Navy boxing teams went head to head in nine exciting bouts, seven of which were televised live on CBS-Sports Network. Sanctioned by the National Collegiate Boxing Association (NCBA) the collegiate group member of USA-Boxing and sponsored by Rowan Technologies Solutions, the show was held at the Pennsylvania Convention Center in downtown Philadelphia. This show was on the eve of the 114th football classic between the two prestigious military academies. Both institutions have been around since the 1800’s and boxing has always been part of the institution’s pastime and intramural sport. Both academy boxing teams have had their share of NCBA National Championships. The Army’s US Military Academy up in West Point, NY have won the NCBA nationals five of the last six years. The US Naval Academy at Annapolis, MD., had a string of wins in the 1990’s  with their last national championship in 2005. Each has had very successful in between years finishing among the top five collegiate boxing clubs in the NCBA.

The NCBA was formed in 1976 and has over thirty five college boxing programs competing in three regions (Eastern, Mid-West, and Far-West). They hold a National Championship every spring this coming year 2014 will be held at the US Military Academy and is scheduled to be broadcast live in ESPN. The show was overseen by NCBA President Ken Cooper of Lock Haven University and Vice President Eric Buller of Miami University (Ohio). Ring Captain was Jeff Jowlet with boxing officials coming from Philadelphia, New Jersey, and New York. 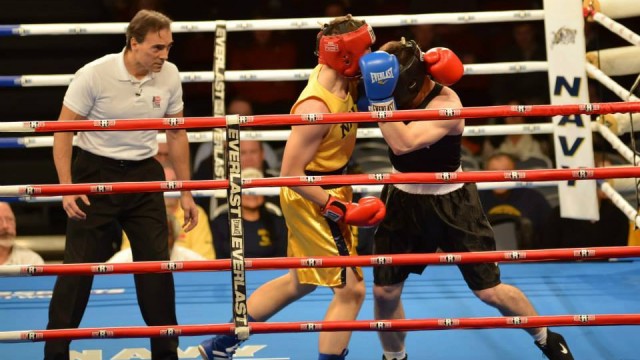 A repeat broadcast of this excellent amateur boxing competition will be this Wednesday night (yes, Christmas night) at 10pm EST on CBS Sports Network. If you missed it live from Philadelphia, one of the boxing capitols in all of the USA, tune in! You will see some fierce competition, exciting crowd-pleasing bouts, and great athleticism to boot as these future leaders of our military go toe-to-toe representing their respective programs. And if you are keeping score, CBS will only broadcast seven bouts four or which Army won, but for the real record, Navy won the two preliminary bouts and took the fight night’s honor with a total 5-4 decision over Army. See you around the ring, B. Breen! 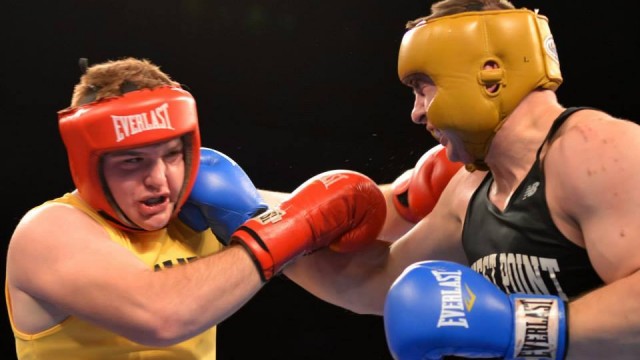 Results of the Army vs. Navy NCBA Boxing Classic: